Zoe Savoie has always been around volleyball, and her interest in playing the sport began at a young age when she was watching her cousin, Stefan Savoie, play.

Stefan was an impactful player who played for Team Canada and represented Manitoba at the Canada Games in beach volleyball. Stefan was well respected throughout the volleyball community and now there is a Stefan Savoie Memorial Scholarship of $1,000 given out to one graduating high school volleyball player each year.

“Just watching my cousins play when I was really young made me want to play,” said Zoe Savoie. “… I just kind of wanted to be like them.”

Family and volleyball had always been tied together in Savoie’s life. So, things weren’t easy when her mom was diagnosed with aggressive brain cancer during last year’s volleyball season.

Savoie said she took a step back from school at the Université de Saint-Boniface, deciding to take a lighter course load of three classes in the first term last year.

“I knew what was coming … her diagnosis wasn’t good,” said Savoie. “So, I knew staying home and spending time with my mom was important.”

Although she took a step back from school, she played the full season with the Les Rouges volleyball team that year.

“I had these two hours of practice, or a game, that could kind of be a release,” said Savoie. “I’m not going to say it was a time to kind of forget about everything, because it still was in the back of my head all the time.”

Savoie said it wasn’t just about getting away for a couple hours, she also played for her mom.

“My mom was super involved in my volleyball career,” she said. “She watched every game that she could on a live stream and everything up until the semi-final when we lost — she was able to watch that one.”

Savoie said she thinks she played so well because she knew her mother was watching, and she wanted to make her proud.

Savoie and the Les Rouges lost in the MCAC semi-final last year on Saturday, Feb. 23 — 11 days later, her mom passed away.

This season, the Les Rouges finished in first place with a 17-3 record, but lost in straight sets to the CMU Blazers in this year’s championship game. That was Savoie’s last match with the Les Rouges, as it was her final year of eligibility.

Savoie won’t be on the court, but she’ll be on the USB campus finishing her business administration degree, planning to major in human resources.

“I bet you I’ll probably have a lot of time on my hands next year,” she said while laughing. “It’s going to be weird.”

Savoie said she may not be able to suit up and play for the Les Rouges next season, but she’ll be in the bleachers cheering her former teammates on, like her mom did for her.

Will Ramsey was one of the many Pilots players pounding the ball in the match and he was named PUC’s player of the game.

The Pilots came out strong in the first set, winning 25-9 and looking like they could do no wrong.

“It was so much fun, we had a lot of intensity right from the beginning,” Ramsey said. “… Also, the fact we’re all well rested.”

Providence led 5-3 early on in the opening set, before firing off 10 straight points to push them to the set victory. Pilots’ left side Thomas Copland slammed down two kills and converted a tip during the 10-point swing.

All-conference players Willie Goossen and Jonas Friesen were also a force on the court, converting kills throughout the match.

Ramsey said the depth of this Pilots team forces defences to choose who to block more, allowing the others to have more open looks. Also, if someone is struggling, the team knows the next man will step up.

Les Rouges middle, Colin Boissonneault, did all he could in the second and third set, slamming down kills and energizing his team and the crowd.

The Pilots are set to play in the final at 1 p.m. on Saturday, and Ramsey said the team needs a repeat performance of today’s game.

“Same thing come out flying … and go out swinging,” he said.

The host Canadian Mennonite University Blazers topped the Assiniboine Community College Cougars 3-0 (25-14, 25-17, 25-17) on Saturday. With the win, the Blazers will look for revenge against the PUC Pilots — the Pilots beat the Blazers in last year’s final.

Hofer made plays when he needed to and was a key player and leader for the Blazers in the win. Prior to the game, Hofer and left side Cameron Gayleard were presented their MCAC all-conference team awards.

“Those two recognitions for me and Cam, they just mean that we play with a really good team, I think that’s all that it means,” said Hofer.

CMU slowed down league MVP Paycen Warkentin, not allowing him to get many open looks throughout the three sets.

“I think that it just requires a bit more focus, we have to know where he [Warkentin] is on the court and I think we did a really good job of shutting him down,” Hofer said.

ACC all-conference player Braden Campbell took advantage of the extra attention put toward Warkentin. He slammed down multiple kills in every set, keeping ACC in the game, earning him ACC’s player of the game honours.

The Blazers cruised to a 25-14 first set win but faced a heavy resistance from the Cougars in the next two sets.

CMU led 6-4 early in the second set, before Matthew Page rifled off three straight kills. Matt Sawatzky followed with back-to-back aces, before Page converted two more kills. Gayleard finished off the 8-0 run with a kill of his own.

In the third set, Hofer and Sawatzky combined for a massive block on a on a jumping Warkentin kill, forcing the crowd to erupt.

The Blazers and Pilots will battle for the MCAC championship Sunday at 1 p.m., and Hofer thinks his Blazers can pull off the win.

“We just go out there and have fun … when we’re having fun, I don’t think many teams can stop us,” he said. 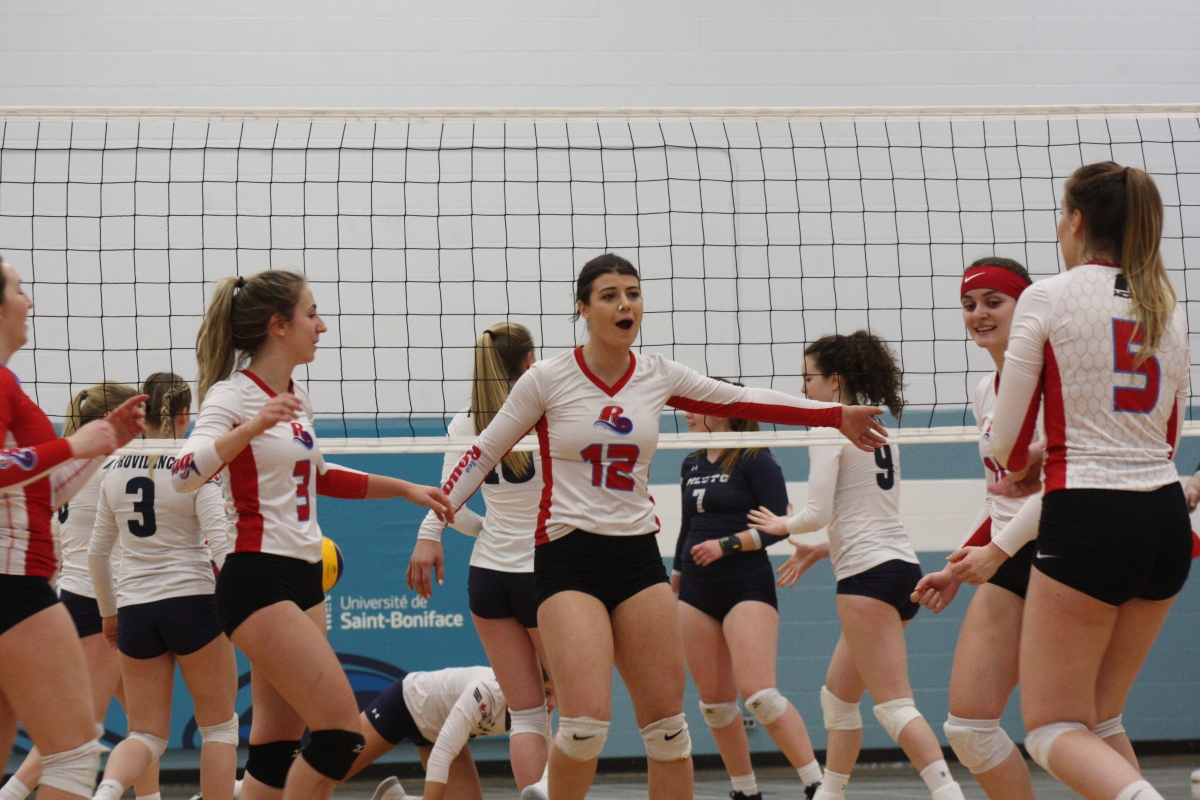 Brielle Grenier had 27 kills over two games last week, 20 of them came in a 3-2 win over the RRC Rebels on Thursday.

The USB Les Rouges went 2-0 over the weekend, defeating the PUC Pilots 3-0 on Saturday.

Grenier’s 20 kills on Thursday is even more impressive coming from her middle position. She wasn’t just killing every ball in sight either — Grenier was attacking at a 50 per cent efficiency over the two games.

“Breille had an excellent weekend of play,” said Les Rouges head coach Evan Turenne. “She was involved in the offence and demonstrated an impressive balance of her power game and tactical ball placement.”

Grenier showed some poise at the service line as well, serving up five aces.

Turenne said Grenier works hard in practice and is always looking to improve her game, always demanding a high level of play from herself.

The fourth-year player from Morris, Manitoba is taking the arts program at USB.

The Les Rouges are back in action on Friday, Feb. 14 to host the ACC Cougars. 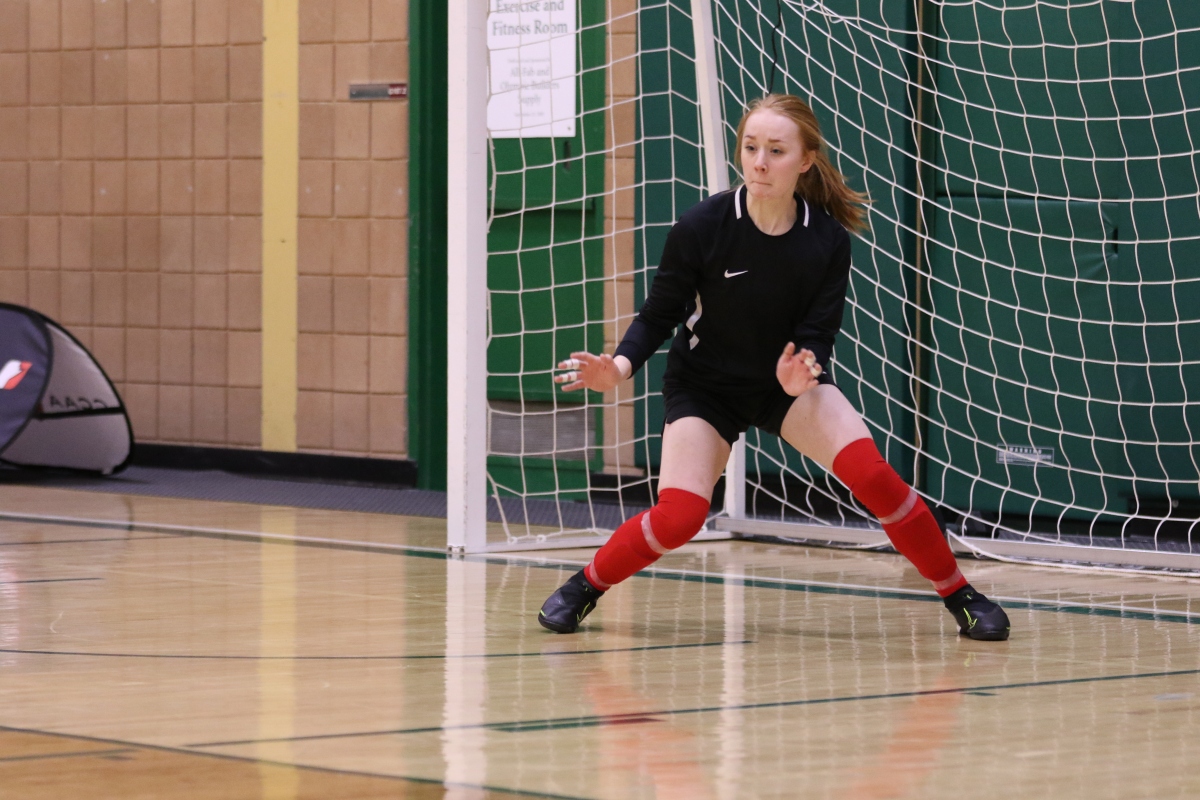 Daneige Edey stopped everything in sight to lead the USB Les Rouges to a 7-0 shutout win over the CMU Blazers last Friday.

It was the second consecutive clean sheet for Edey, who has allowed just six goals against through four games this season.

“Daneige has been putting in some extra work and it’s really paying off,” said Les Rouges head coach Justin Légaré. “She is playing at a high-level, showing opponents that she will not be easy to beat.”

USB sits in a three-way tie for first place with 10 points in the MCAC women’s futsal standings — Edey has played a big role in the team’s success. The Les Rouges are the only team without a loss this season, sitting at a 3-1-0 record, with their tie coming against the BU Bobcats.

“She’s a talented goalie and will be relied on this season as we try to earn another futsal championship,” said Légaré. “She has the ability to make big saves in key moments of the game.”

Edey is in her third year of eligibility and is enrolled in the arts program at USB.

The Les Rouges will fight to stay undefeated when they face the winless ACC Cougars on Saturday, Feb. 8.