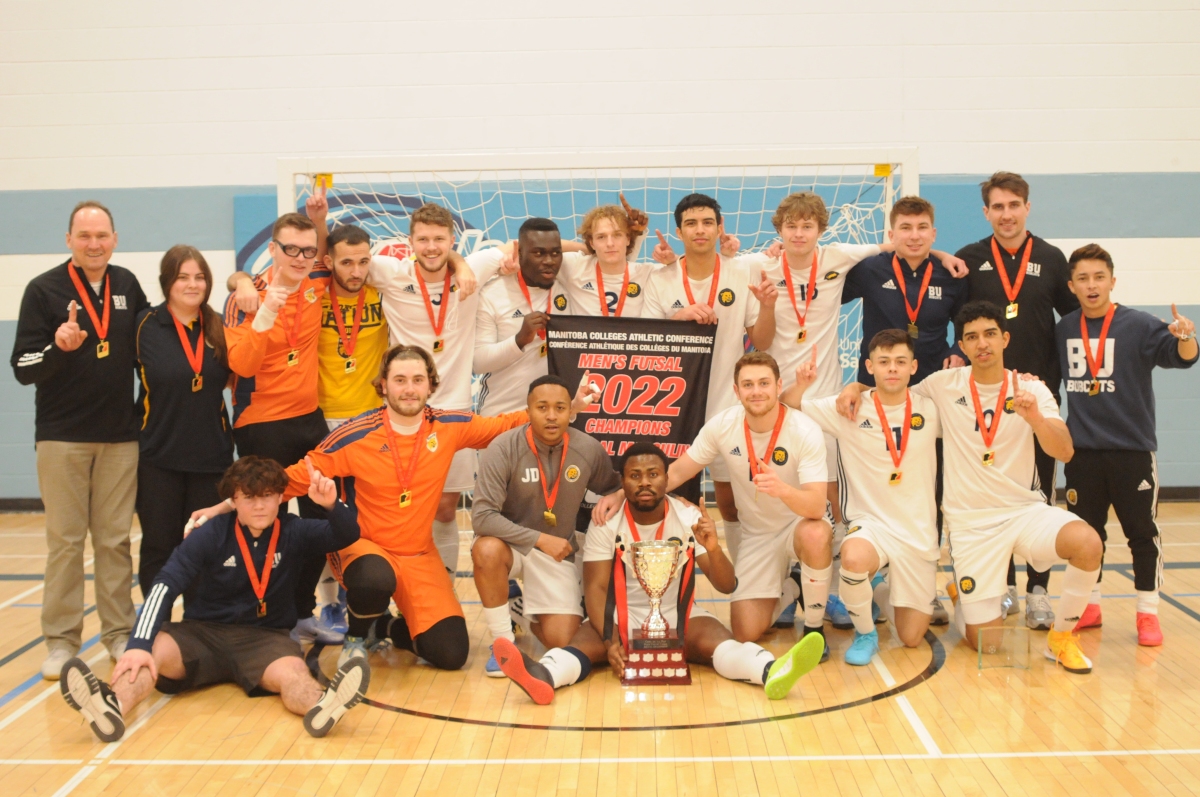 The Brandon Bobcats are the champs with a 11-5 win over CMU Blazers at the 2022 MCAC Men’s Futsal Championship Final and dethroned the reigning title holders.

This was another high energy and high scoring match and a rematch of the 2019 championship final. The same team won again in 2022 as Brandon prevailed with a 11-5 result and earned their second conference men’s futsal championship.

“Quite a weekend, exclaimed BU’s head coach Glen McNabb. “They guys waited a long time for this championship to take place. CMU is a great team and it was hard fought match today.”

Both teams met earlier this year as well as Brandon (3-0-1 regular season; 2-0 post-season) avenged their lone loss of the season by dominating the second half.

Quick goals in the second half by the Bobcats broke open a close affair as they extended their lead to four goals just under five minutes into the final 25 minutes. BU continued to apply the pressure throughout and did not allow a comeback by CMU.

In the first half, the team were deadlocked at two with only eight minutes gone before Brandon found the back of the net and extended their lead to 5-3 and then 6-4 at half.

Championship MVP Diego Rodriguez enthused after the win, “I am so happy for the guys as we worked hard and happy to bring back another banner to Brandon. We learned a lot from the loss earlier this year and changed our tactics for this match.”

Diego’s brother Camilo Rodriguez led the way with four tallies while Cristian Rodriguez added two markers and Diego, Chris Eluemelem and Zach Wood each with one goal for the victors.

For CMU (2-1-1 regular season, 1-1- playoffs), their bid for repeat championships fell short as Daniel McIntyre-Ridd score four times and Will Anderson added one in the loss. CMU’s head coach Anderson Pereira commented, “It was an intense game but we got a little tired and had to change our tactics when we got behind. It is disappointing as high hopes for this season but they capitalized on their chances and no excuses. Proud of the effort despite the result.”

With the win, both Brandon men’s soccer and men’s futsal teams won a MCAC championship title, banner in the 2021-22 season.

McNabb reflected, “Two trophies in one year is quite the accomplishment. It is something that we have not done before and impressed by the whole team as it says a lot about this group.”