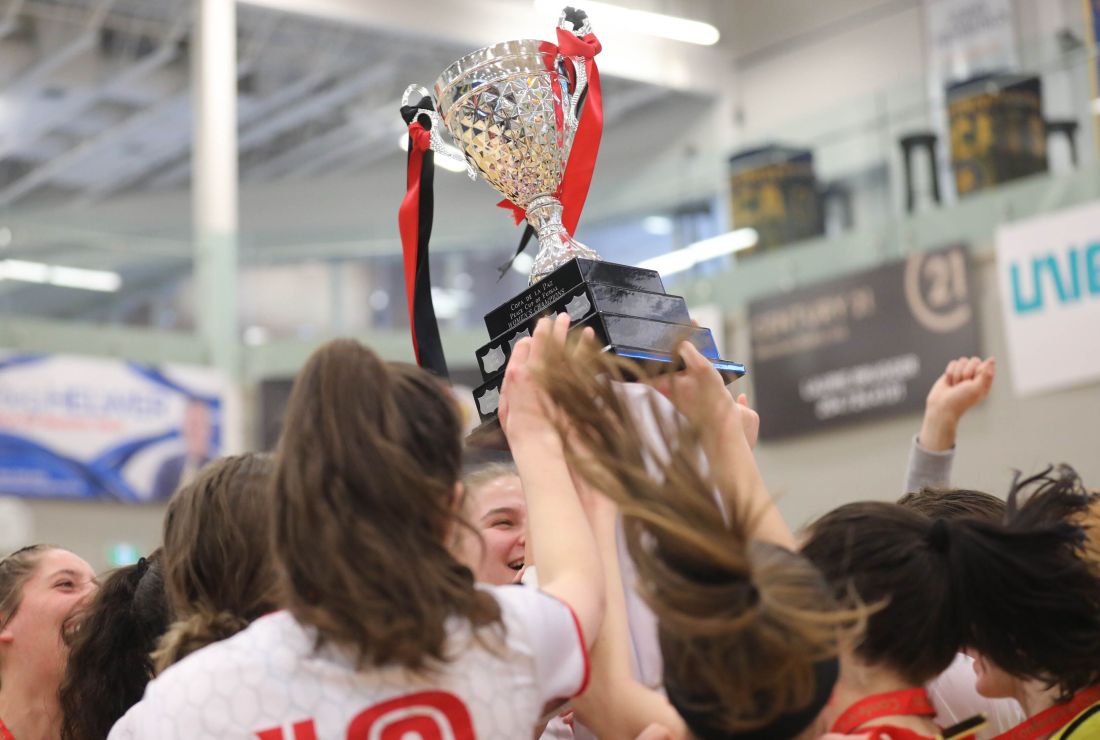 Moniot said she blacked out during the goal and can’t fully remember how it happened.

“My left foot, and I don’t know. I don’t really remember it,” said Moniot post-game. “In that last minute, I just wanted to shoot anything that I really could.”

The Rouges led 4-2 with just over four minutes remaining in regulation. Rebels sniper Jessica Gzebb completed the hat-trick in the 21st minute of the second half. She roofed a free kick to the top right corner over USB goalkeeper Daneige Edey.

In desperation mode, Rebels head coach Doug Lawrie pulled the goalkeeper and sent Kyla Clarke out as an extra attacker with 2:20 left in the period. Seconds later, Clarke ran to the net, got open, received a pass from Kezia Balzer and banged the tying goal to the back of the open net.

With 5.7 seconds left in regulation, the Rouges were awarded a free kick after an Ashley Paterson handball. Cassie Nazeravich set up the USB kick and passed to the open Mylène Chabot who shot wide of the net, sending the game to overtime.

Chabot said the team was “pretty stressed out” during the break between periods.

“We had the confidence, I think we just panicked for a little bit, but we overcame it,” said Chabot.

The teams exchanged rushes throughout the two overtime periods, but structured defensive play by both teams limited scoring chances until Moniot’s dagger with 2.8 second to go. Rouges head coach Justin Légaré said, he was already planning for the shootout and didn’t expect the late goal.

“I was already making my list for the penalty shots,” said Légaré post-game. “I was stressing about who I was going to pick, but they got it done.”

Légaré said the result of the championship match has to do a lot with their success in the regular season.

“We’ve had a few games close games [this season] where they never game up and that’s why we didn’t lose a game this season,” said Légaré.

The Rebels scored the first goal of the match. Gzebb converted a free kick from outside the box, shooting it right down the middle and into the USB goal.

From there, the Rouges took over and scored four straight goals. Final four MVP, Chabot scored three of the USB goals, including a beautiful one-timer off a kick-in.

Légaré said he was glad Chabot was recognized with the finals MVP award.

“Unbelievable. She’s one of the better futsal players in the MCAC,” said Légaré. “It’s unfortunate she didn’t get her all-conference vote, but today I think it was kind of redemption.”

Annick Riet scored the fourth goal in the 24th minute of the first half. She received a kick-in inside the RRC box with her back to the net. She turned around and fired home an off balanced shot.

Gzebb tapped in a goal in the final minute of the half on a perfectly placed pass from Shea Bresciani. The Rouges led 4-2 at halftime.

Defence tightened up in the second half and there wasn’t a lot of open space for either team, until RRC’s furious comeback in the last four minutes.

League MVP Moniot and final four MVP Chabot will both return to the Rouges next season looking to complete the threepeat.