The Blazers and Bobcats will play tomorrow at 1 p.m. at the Healthy Living Centre in Brandon for the MCAC title 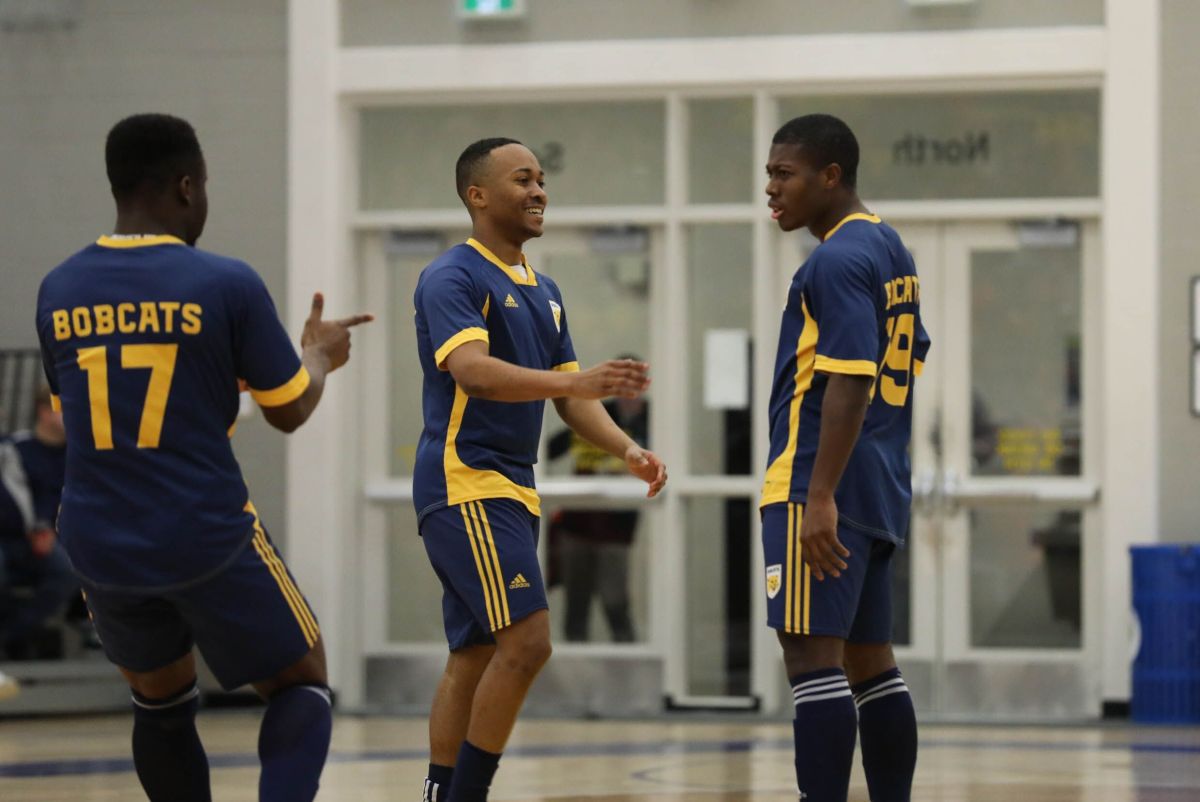 The #2 Brandon University Bobcats fended off a late push from the Université de Saint-Boniface Les Rouges to win 4-3 and advance to tomorrow’s men’s futsal championship match.

USB made plays early on, and Ibrahim Chariff opened the scoring for the Rouges in the second minute of the first half. USB drove the play throughout the first 10 minutes, but the hometown Bobcats flipped the script after that.

Bobcats head coach Jesse Roziere said USB has two lines with two different styles and his team just tried to match up with them.

“Their top line will absolutely punish you, said Roziere. “…I thought our really young guys coped with that line, and our other guys took advantage when we had opportunities to score in the first half.”

Kristen Bender got the Bobcats on the scoreboard in style in the 11th minute. Bender received a pass inside the box with his back toward the goal, kicked the ball backwards with his heel and beat the USB goalkeeper. Bender was named BU’s player of the match after the game.

Rouges midfielder Derek Mains broke out on a breakaway, but futsal MVP, William Tonning made a diving save to keep the score tied at one and keep momentum on the Bobcats side.

BU kept the pressure coming and found the back of the net again in the 19th minute. Samuel Wetstein beat USB keeper, Miguel Petrillo with a perfectly placed shot in the top-right corner of the goal.

Three minutes later, BU forward Chris Eluemelem gained control off a corner kick and found Akim Johnston open in the slot — Johnston made no mistake and slid the ball into the net.

The Bobcats scored their third goal in six minutes when Eluemelem connected with a header on a rebound off Bender’s shot. BU led 4-1 at halftime.

USB came out strong in the second half and cut the lead to two on a penalty shot from outside the box in the 7th minute. Marouane Imaghri sent a powerful shot through the wall of two Brandon players in front of the goal and into the net.

Imaghri made another impressive play in the 12th minute of the second frame. He sent a pass back with his heel to find Aliou Ba. Ba fired the ball past Tonning to put USB down just 4-3 on the scoreboard.

A late push from the Rouges almost tied the game up, but a few big saves by Tonning and some missed shots allowed the Bobcats to hold on to their one goal lead.

Corbin Glufka also blocked a big shot with just over a minute to go in the game.

“It’s the fifth final in a row we’ve made,” said Roziere. “I think it took a while, but we’ve learned to win and hopefully can keep it rolling for one more.”

“Sometimes, before playoffs, we had some trouble keeping focused on the game,” said Moreno. “Today was the perfect game because we are keeping the intensity 100 per cent of the game.”

The Blazers were focused right from kickoff and they were rewarded with a goal in the third minute. Moreno drove to the side of the net and passed the ball back to Victor Hugo was open in the slot to slide in the first goal of the game.

Moreno showed his skill, as he walked into the PUC box and tapped the ball past Pilots goalkeeper Braden Owen to give CMU a 2-0 lead 11 minutes into the match.

Before the half, PUC attacker Aneil Athwal used his tricep to stop a ball from going into the empty net. The ref gave Athwal a red card and he was ejected from the game — a big blow for the Pilots.

Moreno scored his second goal of the match eight minutes into the second half. Moreno shot a rocket from the side of the PUC net, placing the ball in the far bottom corner.

However, The Pilots played a stronger second half and were more aggressive down 3-0. Pilots keeper Owen joined the rush and jumped up to send a header into the back of the CMU net. PUC cut the lead to 3-1, hoping they could carry momentum throughout the rest of the half.

The Blazers didn’t let that happen and Moreno said it’s the coaches that help keep the team calm to avoid a momentum shift.

“They said ‘guys don’t worry, keep working hard, do what we did in practice, then we’re going to be fine,’ and we believe in our coaches,” said Moreno.

The aggressive play by Providence cost them a goal in the 18th minute of the second half. Owen joined the rush and Moreno lobbed a ball over the whole PUC team into the net.

Randolph Lucas added a late goal for the Pilots, but the Blazers closed out the match comfortably.

The final is set for tomorrow at 1 p.m. and it’s a rematch from last year. The Blazers will play the host BU Bobcats at the Healthy Living Centre, and it’s a game Moreno said will be a must see.

“I think it’s going to be one of the best finals in the MCAC history,” said Moreno. “Because the other side they have great players, and on our side, we have great players as well. So, I’m waiting for a great match tomorrow.”