The Providence Pilots are the 2018 MCAC Women’s Volleyball Champions after defeating the Canadian Mennonite University Blazers 3-1 on Sunday.

In front of a packed house at Red River College, the two teams bounced the lead back and forth throughout the first set. The Pilots thrived off some stellar serving from Danella Alvaro and Shayna Staerk, while the Blazers converted at the net with hits and blocks. Providence started to take off down the stretch and pushed their lead to six as they closed out the first set 25-19.

Through the first ten points in the second frame, the Pilots and the Blazers were capitalizing on each other’s mistakes and keeping it close. Once the game tightened up, Blazers Renee Desroches and Pilots Samantha Bridle started setting up some beautiful kills for their hitters.

Staerk had three straight plays on the left side to break the tie and push the Pilots ahead 15-12 then stepped behind the service line to extend their lead to five forcing a Blazers timeout.

The heavy hitters from Providence kept it coming as both Alvaro and LeDawn Friesen drove the ball into the hardwood on consecutive possessions. All-Conference middle Sara Barker drilled home the final ball of the set for the Pilots that took it 25-17.

Bridle quickly put the Pilots up three with some brilliant serves at the start of the third set, but fellow setter Desroches came back and followed suit with her own to take the lead 4-3.

Blazers middle, Chloe Friesen, had some momentum shifting plays at the net midway through the set, connecting on a couple kills and making a solo block. She kept the hot streak going behind the line and extended the Blazers lead to 15-11 forcing a Pilots timeout. 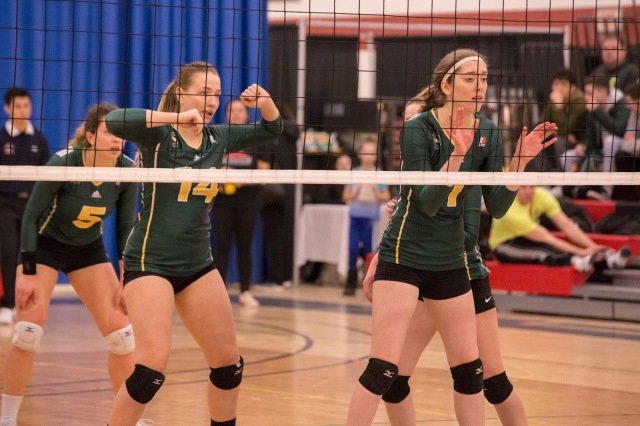 The lead grew to six near the end of the set, but the Pilots came out of their second timeout with a three-point streak of their own to cut the lead in half. At 22-19, Sara Barker played it safe behind the serving line and ended up taking advantage of two Blazers’ errors to cut it down further, but it wasn’t enough as the underdogs took their first set 25-21.

Pilots to ownership of the next set from the get-go highlighted by a shattering solo-block from Savannah Friesen that could be heard throughout the gym. Caroline Seale was also all over the place for her Pilots, making the most of her knee pads consistently keeping her team in rallies with hustle plays.

The Providence crowd grew louder as the victory became closer and the Blazers fans on the opposite side began to deflate. Down 24-10, the Blazers gave one last push before Shayna Staerk punched the championship point home for the Pilots.

Samantha Bridle was named MVP of the tournament for her leadership on the floor, flawless setting, and hustle plays.

Congratulations to all the hardworking student-athletes who competed all season and represented their schools with the utmost class.

A full photo album from the weekend will be posted on our Facebook page soon.