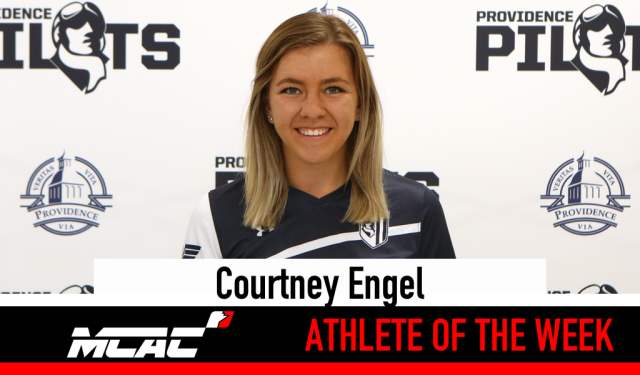 Courtney Engel had herself a weekend on the field scoring the game-winner versus the Cougars and being a huge contributor to her team’s dominant victory over the Blazers.

“Every game Courtney is our hardest worker,” said coach Tory Walker. “Not only does she work hard, but she is always happy and loves the challenge of playing in big games.”

Courtney is a beast in the centre midfielder position where she uses her strength and aggression to control the game from the middle of the field. Courtney is the voice and heartbeat of the Pilots when she communicates well the team does well, and when she works hard, the team works hard.

Courtney just played in her last home game of her Providence career last weekend but will be taking the field with her number one ranked Pilots to take on the Brandon Bobcats in the MCAC Final Four.

The semi-final is this Saturday, October 28 at the Ralph Cantafio Soccer Complex at 12:00 p.m.