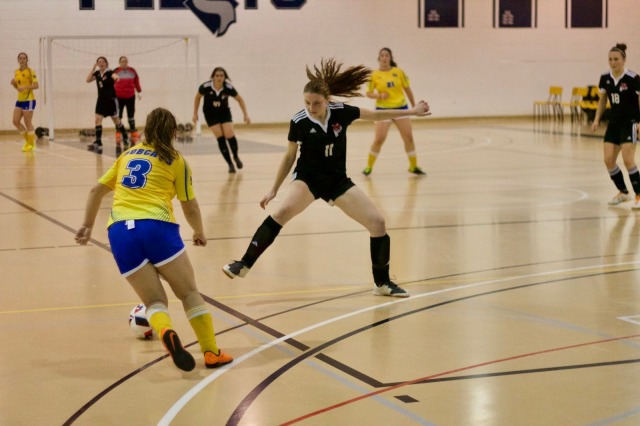 After a quiet first ten minutes, the first chance of the match came when Rebels Keeper Brittany Derkacz was forced to dive to her left and make a partial catch on a shot that was sprung from a large crowd in front of her goal.

Megan Castro got a partial break at the 9:30 mark of the first half but Simone Tuner-Cummer, who played an excellent first half for the ‘Cats, shut the door on a low strike to the corner by Castro.

When Castro was later given a free kick within BU’s side of the court, the wall set by BU’s Jaycee Castle, Jade Barrault and Chelsea Plett was too wide and the defence of both teams continued to swallow any early scoring chances.

At the 5:30 mark of the first half, BU defender Jade Barrault surprised everyone in the gym when she stepped up from  right in front of the Rebels’ bench and launched a bomb that rung off of the far side cross bar, getting the crowd out of their seats and reminding both teams that a goal would need to be scored in order for the game to be won. Play picked up after Barrault’s chance, and the tension that had formed from a scoreless game began to dissipate. 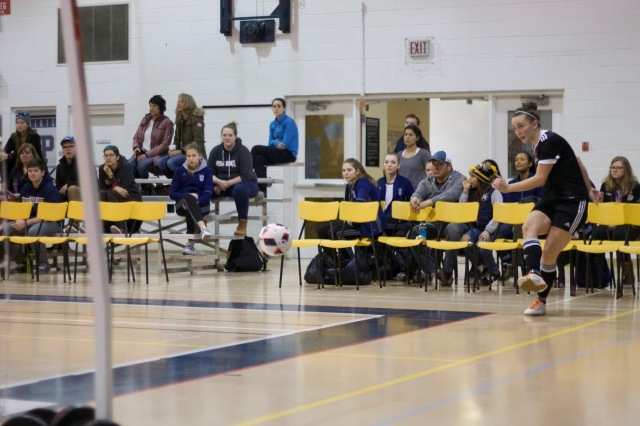 With 3:05 left in the first half, RRC’s Lucija Golubic found herself in close all alone but she missed her mark wide left. She grabbed her jersey in disappointment as scoring chances were so far hard to come by. But Golubic would get a second chance about a minute later, receiving a ball inside the box right in front of Turner-Cummer’s net and this time she made no mistake burying her chance and putting Red River up 1-0.

The goal gave the game some life and a frantic push was made by both teams in the final minutes of the first half. Several times Red River sent chip shots up high to Rebels pivot, Julia Friesen, who’s leaping ability gave her the extra couple of inches above the rest of the crowd to get a head on the ball, but the first half ended ahead  1-0

After another cautious start to the half by both teams, BU finally saw a quality chance at the 20:00 mark. Standing just over half-court, BU defender Cailee Plante collected the ball with patience and placed it perfectly for a streaking Jessica Kalyniuk. Kalyniuk got a single touch before blasting it past Derkacz and tied the game at 1-1. 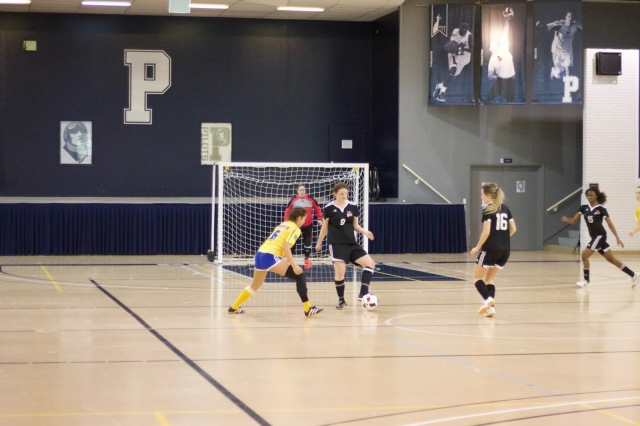 The goal of the game came at 10:51 in the second half when RRC’s Keeper, Brittany Derkacz, collected the ball in front of her net and took a second to weigh her options. She launched a big, overhand throw all the way to the other end of the court where Friesen timed her jump perfectly, taking the pass off her head and putting it past Simone-Cummer’s outstretched arms, putting the Rebels up 2-1.

“It was a beautiful assist from my goalie”, says Friesen.

“It was all her…I signalled ‘to my head, to my head!’ and she put it there perfectly”. 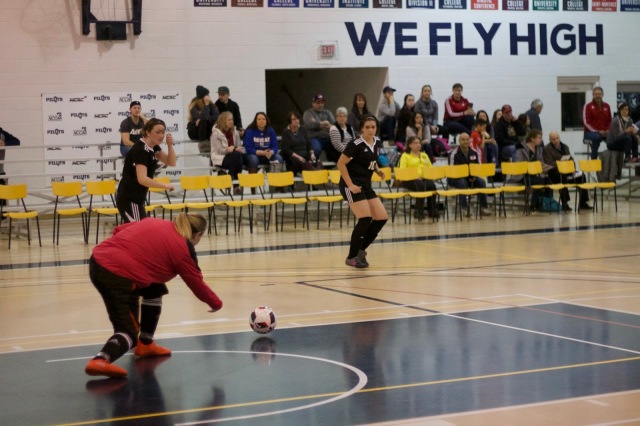 Now playing with desperation, the Bobcats brought their defence up and had Simone-Cummer play free kicks when feasible. But the netminding of Derkacz, the defence of RRC, and the amount of time left in the game were insurmountable for BU and the game ended 2-1 in favour of Red River College.