But drums and noisemakers aside, the 1-seed Blazers showed from the very beginning of the game that they were going to be a difficult upset for Les Rouges. All-Conference fourth year setter, Jason Friesen, played terrifically and used CMU’s offensive weapons to their fullest potential by spreading the ball around and forcing USB to work very hard to get their block up.

The Blazers got a 14-8 lead on USB in the first set, the kind of deficit that Les Rouges could not afford to such a strong and well-rounded CMU team. The Blazers would win the first two sets 25-17, but the second set wasn’t nearly as one-sided as the first as USB was able to keep the Blazers’ lead to just three or four points. However, once CMU reached 20-16 in the second set, they strung the next 5 points together to win and go up a vital 2-0.
Playing with much more desperation in the third, USB led 7-5 thanks in large part to their defence and the left side attacks of Derrick Sabourin and All-Conference selection Eric Dornez. CMU displayed a huge block all weekend but when it mattered, USB was able to turn second-chance plays into formidable attacks and make the Blazers play some tough defence. 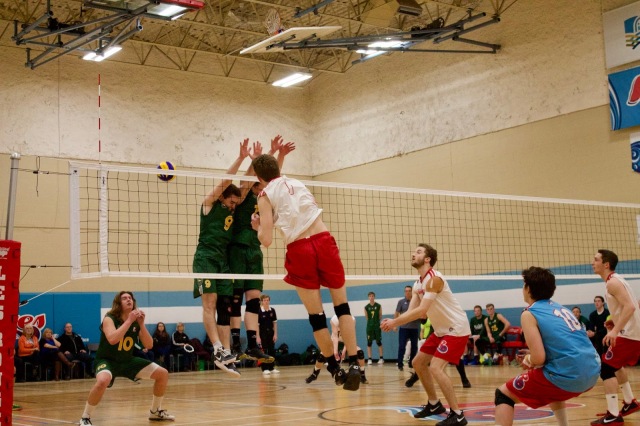 After rallying from a back and forth exchange of the lead in the third set, USB found themselves up 23-21 and looking for the final push to win the set and extend their season. CMU called a timeout in hopes of slowing USB’s momentum and it worked exactly how Head coach, Don Dulder, would have hoped. The Blazers came out of the timeout and won two-straight points, forcing USB to call a timeout and plan how they were going to get a kill off of a tough serve from CMU.
Unfortunately for USB, they weren’t able to get an attack over the net following the timeout and the Blazers went back to serve for the game. After a short rally for game point, USB sent a ball out to left side that 6’5″ right side, John Nieckarz, made a massive stuff block on, giving the CMU Blazers their first Men’s Volleyball Championship since 1987. 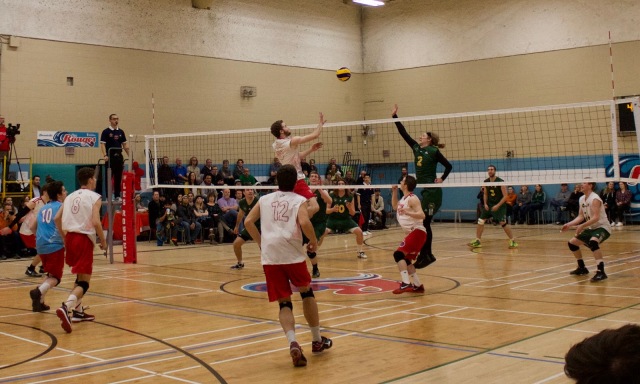 Afterwards, Nieckarz was named Most Valuable Player of the tournament and he explained what he saw on that huge final point.
“We had a specific defensive plan, so our plan was to always go cross-court and I had no idea my middle wasn’t going to be there, so I was by myself, and when you’re by yourself you’ve got to (cover) even further cross. So when I felt that ball hit my hand it was like ‘wow, that solo block actually worked’. It felt awesome”
Playing against a home team in the Final wasn’t something that seemed to phase CMU, and Nieckarz believes the energy was helpful early in the match, no matter who the crowd was cheering for.
“We play good in loud gyms, so that was kind of an advantage to us. Like, we knew USB had home court advantage but the loudness of the crowd makes us play so much better and it’s kind of funny because we’re used to starting off bad. We usually have terrible starts (in games) and that’s how we’d been playing so it was a nice feeling that when the time was right, that we would have a good start”.
Canadian Mennonite University was founded in 2000 when Canadian Mennonite Bible College and Concord College merged to form CMU. CMBU won the Men’s Volleyball Championship in 1987, the last time that CMU or it’s founding colleges hoisted the trophy. 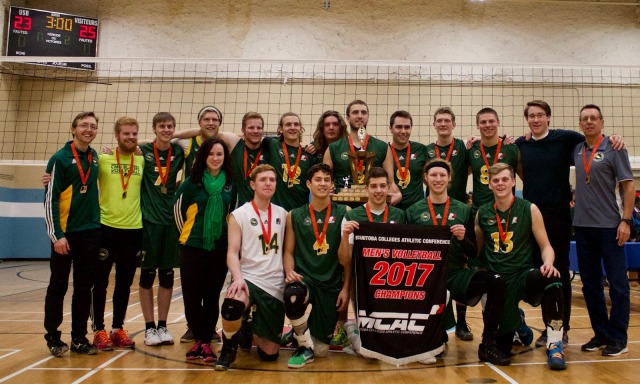