Providence University College will try to repeat as MCAC champions this weekend but their road to back-to-back trophy presentations will start against a Red River College team that pushed the Pilots to five sets when the two teams last saw each other on February 4th (25-13, 19-25, 25-27, 25-21, 15-7).

RRC Head coach, Dan McGregor, believes the time off between the end of their season and this weekend’s semifinal matchup has been a big boost for the Rebels.

“I think our team feels pretty confident, we have played Providence tough throughout the year and are looking forward to the matchup. As we have only had eight or nine players for most of the season it has been a grind this year. We came out of the gate pretty strong in the first half, and as the season has gone on it has been tough due to injuries and fatigue. Having these two weeks off before playing the final four has helped us to recover.”

Providence has to feel good about coming back to the Championship weekend ranked first, as they’ve spent most of the season leading the field with only the CMU Blazers nipping at their heels. PUC Head coach, Kyle Guenther, knows a first round matchup against RRC will be a challenge.

“All four teams in the playoffs have played well throughout the season and we have to be prepared for all of them. That certainly includes Red River. After our last match with them that went five sets, we know it’s tough to put a ball away against them.”

PUC Right side, LaRae Driedger, and Left side, Shayna Staerk, are just a couple of the offensive weapons that made PUC so good this season. To play well against Providence means stemming their offence, something Guenther knows RRC is capable of.

“They play great defence and extend rallies which can frustrate us and force us into errors. We have to be prepared for this and stay aggressive”. 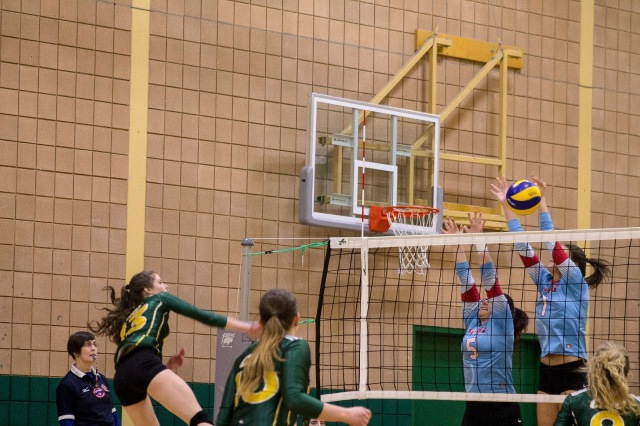 Canadian Mennonite University’s last conference game of the season was a 3-1 win over Université de Saint-Boniface on February 10th. This was the first game during the 2016-17 season that Les Rouges were able to get a set off of the Blazers after being swept in all three of their previous meetings. But USB Head Coach, Martin Rochon, knows that Saturday’s semifinal can still be won by either team and likes his team’s current mindset.

“Our team feels quite good. We have improved steadily throughout the year and I believe our best game is ahead of us. We have had some great confidence-building wins in the second half (of the season) and we know that when we are at our best we can beat anyone in the league”.

Blazers Left side and MCAC Week 18 Athlete of the Week, Katie Reeves, as well as Middle blocker Rayzanna Kehler have been league standouts for CMU this season and will undoubtedly be factors this weekend. But two players aren’t the only reason the Blazers have been so steady, having not lost a conference match since January 17th when they lost 3-2 to Providence. The Blazers’ have a very strong roster from top to bottom.

“CMU has a balanced attack therefore it is difficult to focus on one player”, says Rochon. “
The most important thing will be for us to play a disciplined game and stay focused on our execution. We have many young players who have been performing well all season and I am certain they will be ready on Saturday”.

The Providence University College Pilots enter this weekend defending the 2015-16 MCAC Championship they won at home in Otterburne, MB last season. They feature an explosive outside attacker in Week 12 MCAC Athlete of the Week, Adrian Dyck, who Head coach, Scott Masterson, can expect USB to have their eyes on at all times.

“I think Adrian is having an incredible season and is really enjoying his role on the team” says Masterson. “He’s tough to stop but he also opens things up for all our other guys so they can have a greater impact. I still see us having a well-rounded offense and we hope to be able to play great team defense”.

In their season matchup, PUC got three wins off of USB (3-1, 3-0, 3-0) after USB had won their first meeting of the season 3-2 in late October. Week 18 MCAC Athlete of the Week, Nico Marcon-Lajeunesse, has been a solid outside attack for Saint Boniface this season as well as a veteran presence on an otherwise very young Les Rouges team. Marcon-Lajeunesse is in his fourth year of MCAC eligibility and middle Pierre Landry in his third, but every other player on USB’s roster is a rookie in the MCAC. Playing in their own community in front of what should be a favourable crowd for USB, Les Rouges going up against the defending champions will be a great test for a young USB squad says Head Coach, Guy Bourgeois.

“I’ve seen these guys embrace the team concept in a special way and it’s cool to be a part of. The boys are really looking forward to performing with the extra boost our awesome home crowd provides.”

“Providence are a very well coached team and defending champions for a reason. They have dynamic athletes in multiple positions and we will need to play our best defense of the season in order to slow them down. Our group is really embracing and looking forward to that challenge”.

Just like the other Men’s semifinal matchup, the season series was split 3-1 between these two teams with CMU coming out on top. Some of the Blazers likely don’t forget how their season ended last year, when they lost their lead in a tough match against RRC and were forced to watch the season’s Final from the stands. Second-year right side John Nieckarz has been both an offensive and defensive stalwart for the Blazers when healthy and Week 14 MCAC Athlete of the Week, Mackenzie Hildebrand, is a high flying left side who has been a welcome addition for the Blazers this season. CMU’s setter, Jason Friesen, has also turned heads around the league while distributing the ball for a Blazers roster that has proven to be one of the most talented in the Conference. But CMU Head coach, Don Dulder, knows that rankings are simply just numbers on paper at this point in the season.

“It is important to realize that all four teams are on an even playing field now. Being the one-seed doesn’t mean much. We have to bring our ‘A’ game in order to be successful. All four teams are good teams. There is a great deal of parity in our league this year. We need to perform all the basics well and play smart”.

UW has been a very scrappy team this season, making the 2017 Final Fours with limited numbers on their bench and relying heavily on Week 9 MCAC Athlete of the Week, Turner Johnson. The Wesmen’s shortage of players meant creative lineups and rotations for them during their 2016-17 season, and although Johnson can be a very deadly outside attacker, he is listed as a setter and Head coach Richard Wiebe will sometimes run a 6-2 rotation so that Johnson can both set and get some swings in. Having lost their last three games of the season to the other three participating teams in this weekend’s championship, the Wesmen are looking to get back to their winning ways nearly a month after they had their last conference win.