Six of the eleven players named to the 2016 MCAC All-Conference team belong to Universite de Saint-Boniface Les Rouges and Red River College Rebels. The first-seed Les Rouges were looking for their third straight MCAC men’s soccer title, while the Rebels were trying to get RRC its first Men’s title ever. 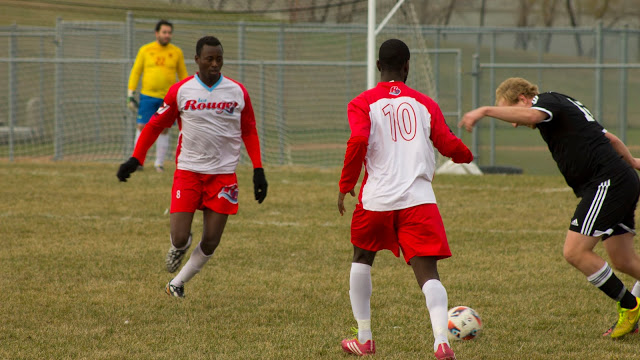 There was no love lost between these two teams, testing the referee’s judgement throughout. After a collision in front of Red River’s goal with All-Conference keeper Rory Picton and USB’s Sam Dhaoui, Picton was forced to come off with an apparent lower body injury. Picton played a huge role in the Rebel’s 2-0 semifinal win over Canadian Mennonite University on Saturday, and it was if his exit from the game opened the door for USB.

Before Picton’s backup, Shayne Pfeifer could get comfortable on the cold and windswept field, Les Rouges’ forward Aristide Ebrottie placed a ball in front of the goal mouth for midfielder Melchisedek Nkongo to put St. Boniface up a goal.
The second goal of the game would come when Sami Atoui took advantage of Pfeifer and the Rebels defence playing much too casually in their own end, and Les Rouges all of a sudden had a commanding two-goal lead.
In the second half the cold weather and fatigue started to wear on both teams. Play became physical and officials had to collect a great deal of injury time as players went down.
Ebrottie was red carded for an unsportsmanlike play and all of a sudden USB was without an important piece. Conduct has been a point of weakness for Les Rouges in the past, but they gathered their composure and resumed play. If there had been a time for Les Rouges to unravel it would have been now, but midfielder and third-year team captain Yahia Chihab got control of his teammates and settled them down. 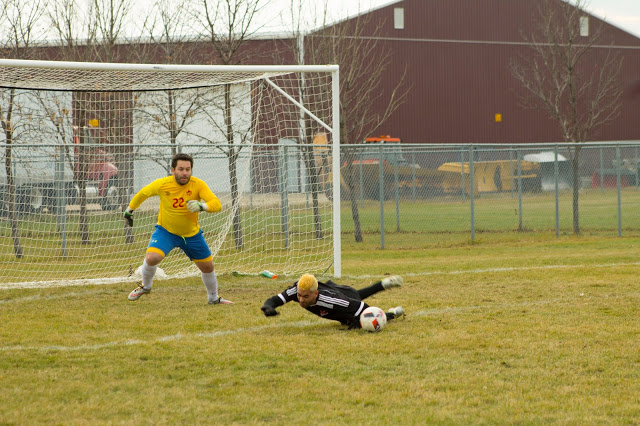 RRC continued to play as fast as they could and were able to spring a couple chances late, but in the end they couldn’t put anything past USB keeper Samir Achour before the final whistle. Universite de Saint-Boniface were crowned their third-straight men’s soccer title. Melchisedek Nkongo was named Player of the Tournament.

USB Head Coach Justin Legare was extremely happy with the way his team played.“They played incredible… I was really pleased we actually played our game”.
Legare said Ebrottie’s departure from the game was unfortunate considering how hard this team has worked on removing negative attitudes and playing through the ins and outs of a game. He says this is something that differentiates this year’s team from last.
“I had a lot of chats (this season), lots of talks with my players. We also brought in some players from structured soccer backgrounds which helped a lot too, so both of those things kind of helped.”
“I knew I had to the team to win this season, but it’s not always easy being the favourite. We put in a lot of time, a lot of time, and the guys worked so hard and it paid off.
Moroccan sniper and All-Conference selectee Yahia Chihab said he recognized his Les Rouges teammates begin to lose their composure late, but had too much time left on the clock to let them implode.
“(After the Ebrottie red card) I asked the ref ‘How much time’? And he said ‘fifteen’, and I said that’s kind of a lot of time…I told the guys to stay up and just (win).”

Chihab is thrilled to win his third Championship in a row.“The third one was very important to me. Especially with Red River this year, they were really scary. A great roster with all their guys, they’re very good. So I thought this year there would be a lot of competition in the Final, but I’m just so happy!” He laughed. “The third one is magic”.