Both sides spent a lot of the first half trading the ball in neutral areas, the first scoring coming shortly before half when Jaycee Castle put one in for BU. Castle has been a scoring machine every season she’s played in the MCAC, and she looked comfortable throughout the semifinal matchup as if it was any other game. 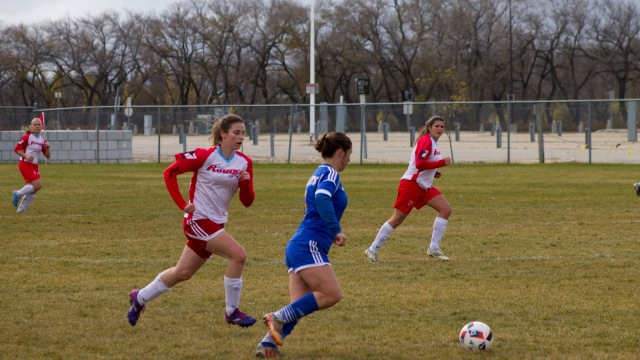 Neither side dominated the first but BU was able to put balls on net, something USB struggled to do. Jade Barrault, a third-year defender for BU and one of the fastest players on the field, kept play away from the Bobcat’s net for most of the game.

Aziza Kinnarath was once again a force throughout the middle of the field for Brandon, moving a lot of the traffic and sending strikers like Castle on runs. By the second half it was clear this would be a low scoring affair, much different than the other semifinal.

BU would add another before the final whistle and once again will play for the Championship against Red River College tomorrow at 1pm.

2016 regular season MVP Megan Burns, whose Les Rouges made the final tournament in the team’s first year back within the conference, liked what her team could do against an opponent who is more experienced in post-season play.

“We knew Brandon was going to be really tough so we came ready to play. I think we held them really well for a while and I think we played really well, it just didn’t happen today.”

Barrault was named Player of the Game for BU while another defender, Deanna DeMare, was named for USB.