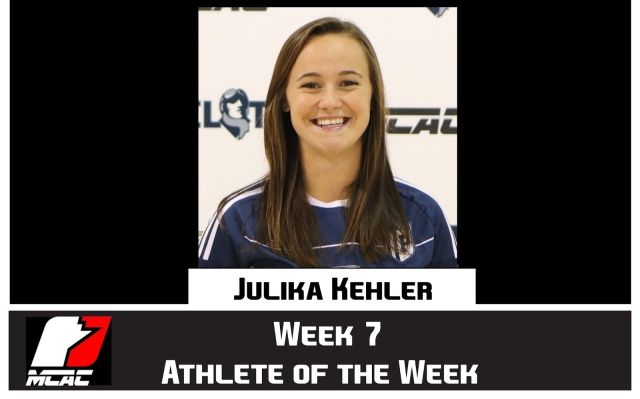 The Providence University Pilots are heading into this weekend’s MCAC Soccer Final Fours with the fourth seed, and it took a big season from their third-year forward, Julika Kehler, to get here.

After dropping their first contest of the weekend to Brandon University last Saturday, the Pilots sat just one point ahead of Canadian Mennonite University heading into their Sunday afternoon game against the Blazers.

“She was our captain and leader, says PUC head coach Tory Walker.

“We needed a win or tie against CMU Sunday, she stepped up and played extremely hard and scored the second goal.”

The Pilots managed to stave off a desperate Blazers squad long enough to finish the game with a 2 – 2 draw, giving them a birth to the 2016 Championships this weekend at Red River College. Both sides knew the implications of the game and both sides controlled the play throughout the game. 5’4″ Kehler was a constant scoring threat though, using her exceptional speed to keep CMU’s defence in check all game.

Kehler, who is originally from Buena Vista, Paraguay, lead her team in scoring this season with 14 goals and 8 assists.

“Julika is a pivotal part of our team, she is our energy and aggression. When Julika works hard the team works hard. The whole team looks to her each game for leadership and Julika always provides that”, adds Walker.