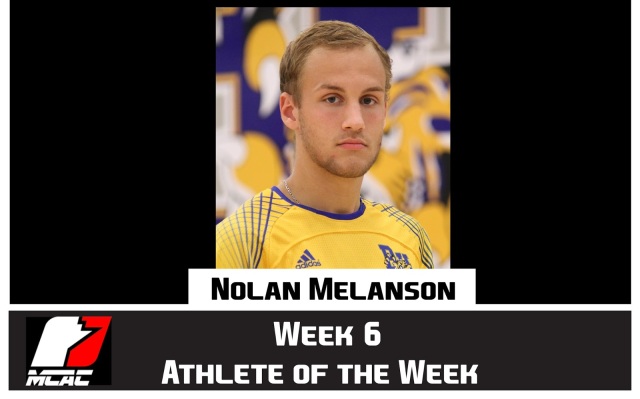 The Brandon University Bobcats captured their third-straight Prowler Cup in Week 6, thanks in large part to five goals scored by Bobcat’s 5’11” rookie forward Nolan Melanson. BU beat Assiniboine Community College 8-2 on a soggy Healthy Living Centre field that was holding water by the end of the match.

“Coming in as a first-year student-athlete, we had very high expectations of Nolan as we had watched him play this past summer with the U18 team,” says coach Jesse Roziere. “Nolan is a very skilled player that shows up every day with a fantastic attitude and a desire to get better. He possesses a natural scoring ability, and it is fantastic to see Nolan rewarded for his efforts.”

The Prowler Cup is a friendly inter-league competition between the MCAC’s two participating schools from Brandon, BU and Assiniboine Community College. Bragging rights and trophy go to the school who accrues the most wins against the other during the men’s and women’s soccer seasons. And although BU had already secured enough wins this season to reclaim the title, Melanson’s five goals was an exclamation point for the Bobcats men’s team who beat the Cougars in Week 6 by a score of 8-2.

Melanson and the ‘Cats will hope to follow up last week’s play with a big game at home Saturday against Providence University College at 3:15pm, followed by the last match of the regular season, a tilt with #1-ranked Red River College. BU sits fourth in the MCAC standings, good enough for a trip to the following week’s Final Fours. But with several games being played around the league this weekend and such small margins in the rankings, it’s a great finish for the 2016 regular season.