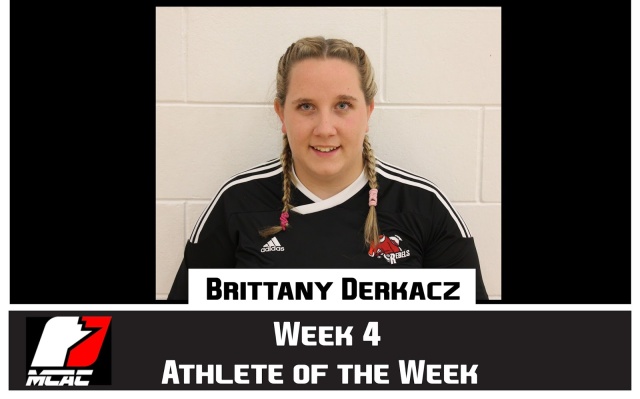 The Red River College Rebels are rolling with a 5-1-0 record so far this season, good for first place in the MCAC. They’ve kept their record tidy so far through the protection of their own net, which belongs to rookie Brittany Derkacz.

“She earned two shutouts last weekend to bring our total to four on the season”, says Head Coach Doug Lawrie.

“Brittany is full-value for her two shutouts last weekend. In a tight game against CMU she was called on to make two athletic, fingertip saves in the second half to protect our lead and earn the shutout.  Against Universite de Saint-Boniface there were several scrambles in the box where Brittany was able to secure the ball with pressure all around her.”

A 5’6” first-year Business Administration student from Winnipeg who previously played for Miles McDonnell Collegiate, Derkacz has also played for Wolves United in the Winnipeg Women’s Senior League for the past two seasons.

“Brittany has earned the confidence of her teammates and is a big reason we have only conceded 3 goals-against in six games”, adds Lawrie.

The Rebels’ record is a full-on streak now, having conceded only one draw so far this season that came against BU back on September 17th. They have yet to drop a game this season, featuring a +13 goal differential and a stranglehold on first place in the MCAC.