Just hours prior, the Rebels had knocked off the most disciplined team in the conference in the Canadian Mennonite University Blazers, on the Blazer’s home court, in front of a predominantly CMU-supporting crowd. And it was no fluke: the final score of 5-2 was a product of some extremely stifling defence and a couple of goals that looked to come straight out of head coach Jordan Goetting’s playbook. The final tally, for instance, was a beautiful play off of a free kick in which Paulo Nonnenmacher met a pass from Derek Tessier – who made it look like an attempt on net – right beside the left post. It was the final nail in the Blazer’s season and it stood as a great reminder of how dangerous every team can be in MCAC futsal.

Les Rouges had a much different birth into the final scoring early and often against a Brandon University team who couldn’t match the passing and overall foot speed of USB from the first whistle, eventually falling to USB 11-5. USB, after all, was one of the most gifted teams in the MCAC. And not just the most gifted futsal or soccer teams, but one of the most talented teams throughout any sport in the MCAC. However, their passion and discipline have been known to collide head-first sometimes, making for a messy result and a player or two missing from their lineup. Last year’s 2015 MCAC futsal final was a good example, when Les Rouges committed too many fouls and were left to watch as CMU won on their home court via a number of penalty kicks.

So when the #2-ranked Rebels and #1-ranked Les Rouges met yesterday in the 2016 Final, it was very much either team’s game.

Understandably, Yahia Chihab, the tall and lanky pivot for Les Rouges, opened all scoring in the match. Chihab had an unbelievable season for USB, scoring the second-most goals in the regular season behind RRC’s Derek Tessier and 5 goals in the semi-final win over BU alone. Chihab’s goal scoring never looked to be a product of selfishness though, as his passing with USB’s defence and wingers was just as remarkable as his ability to find the back of the net.

Speaking of Tessier, he was a huge factor in the match as well. Standing at just 5 feet 6 inches tall, Tessier’s speed and shot has made him one of the biggest threats in his 2 seasons in the MCAC. His ability to beat defenders off the dribble makes him a dangerous scoring threat but the fact that he played much of this futsal season on defence goes to show how much of an all-round player he is. 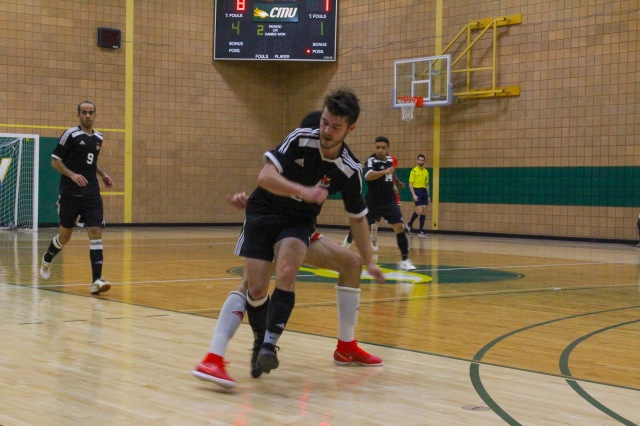 However, it wasn’t long into the first half of the match that the efforts of RRC looked to be futile. The defensive pairing of brothers Houssemeddine and Seifeddine Dhaoui were one of the best in the MCAC and they did a great job at neutralizing Nonnenmacher and Cesar de Costa Carvalho, two Rebels that had been having a great tournament so far.

By half, the Rebels were already several goals down and USB was doing an excellent job at controlling the play, along with their emotion. It was clear the memory of last year’s final was not distant in Les Rouges’ minds and they did a better job at not letting officiating dictate their moods. Once USB had reached their maximum number of fouls in the second half and each remaining foul meant a penalty kick for the Rebels, keeper Samir Achour was outstanding for Les Rouges, turning away a couple and allowing just 1 goal from kicks. At game’s end, Les Rouges won the 2016 Copa De La Paz Championship with a commanding 10-5 victory.

USB’s Seiffeddine Dhaoui was named the tournament’s Most Valuable Player.