If you kicked a ball for the Red River Rebels this season, chances are you had a pretty good season.

After the women’s soccer team went undefeated during the entire 2015 season, both the men and women Rebels futsal teams found themselves in this weekend’s Copa De La Paz Futsal Championship Final.

The women came into the tournament ranked behind host Canadian Mennonite University, a team that featured one of the MCAC’s most dynamic goal-scoring pairs in Marijka Yaschyshyn and Esther Schwarzkopf. And of course, the Loewen Centre throws a good shaker so the Rebels had their work cut out for them.

However, none of this seemed to interest the Rebels as they hammered out 3 unanswered goals in the first half.

After Stephanie Morris opened the scoring, Kaelyn Vincent found the back of the net before an own-goal made a gold medal on their home court look a whole lot more difficult for CMU. The size of Vincent in the centre of the court along with the speed of Jessica Lister and Kelsie Paul make the Rebels a constant scoring threat. And much like their semi-final game against Brandon University, RRC keeper Addison Zeltins played outstanding, making the extremely difficult position look easy. But CMU wasn’t about to go quietly. Schwarzkopf and Yaschyshyn both buried shots less than a minute apart to put the building into a frenzy and the hope alive. Less than 10 minutes later Schwarzkopf found her second goal of the night, posing a huge possible upset. Upset? Wait, weren’t they the first ranked team? Playing a group of athletes who went undefeated in the soccer season and won it all? It felt like both teams were up against the world when in reality they were both favourites. I love sports. 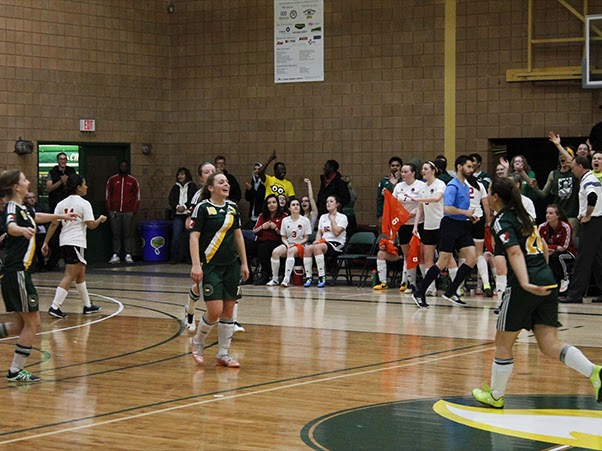 That put the Loewen into full chant mode and everyone in the crowd was now a ref, as students used pieces of a torn up sign to dole out their very own neon green cards. Things were going well for the home crowd – the comeback was alive. And that’s when Kaelyn Vincent did a very Kaelyn Vincent thing.

Flashback: Vincent scoring the go-ahead goal through the hands of BU’s keeper in November, the 2015 Soccer Championship Final. The Rebels had been losing all game and it was looking bleak, and Vincent’s kick looked like a harmless play to get the ball deep because she was standing so close to half. But with a foot made from the hammer of Thor, Vincent put it through the keeper’s hands stretched above her head. It was a bomb.
So it shouldn’t surprise you that it was again Vincent who took a raucous crowd and gave them one more reason to shhhhhhhh, scoring off an odd little heel kick that went about as high as it did long but putting the Rebels up 4-3 all the same. That was soon followed up by an awesome goal by Lister where she divided the defence and one-timed a nice pass past CMU’s Tegan Willick and all of a sudden another comeback with half the amount of time to do so was impossible. Rebels 5, Blazers 3. And so the Rebels won it all, again. If you kicked a ball for the Red River College Rebels this season, enjoy it – you had a great season. 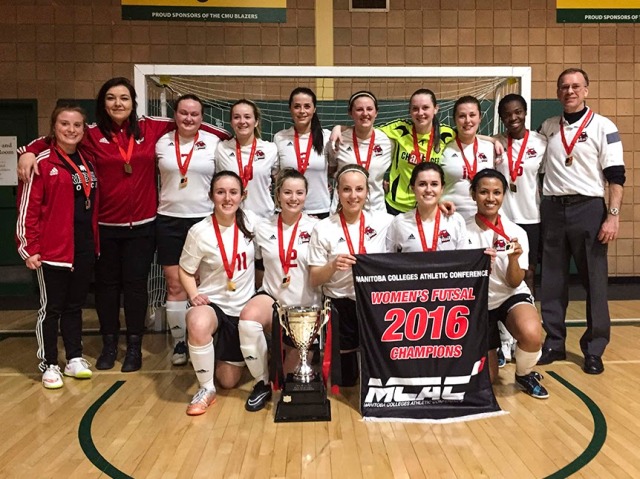