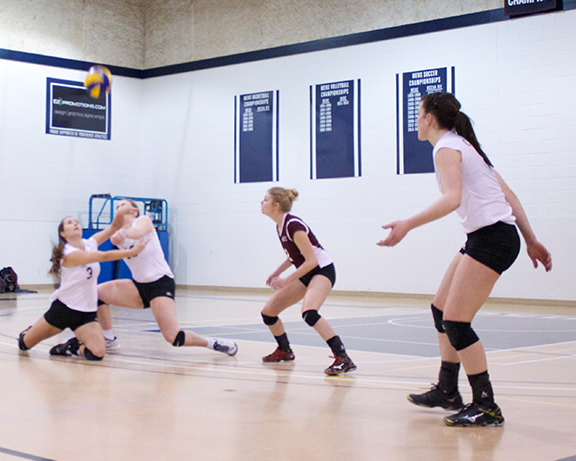 Much like the first women’s semi-final match, the higher seeded team jumped out to an early and commanding lead. ACC left side and 2016 MCAC Most Valuable Player, Brook Huculak, thinks her Cougars didn’t show up with the game they’d hoped to put forth.“We didn’t expect that (result) from ourselves. We know Providence is a good team but we know we had all the components to beat them and I think we just let the nerves get the best of us”.

The match followed the men’s first semi final matchup featuring the same two schools. By this time the gym had filled with host Providence’s fans and the gym was as raucous as it had been all day. This made for a considerably different atmosphere that favoured the hosts, something Huculak concedes may have been a factor.  “Some people thrive off the noise, like myself I like playing with big crowds but some people aren’t as used to it. I’m sure it got under a few people’s skin and it probably was a contributing factor”. Providence played a very even-keeled game and kept their own errors low. The Pilot’s Player of the Game, Shayna Staerk, got her shots in but it was difficult to see which position Providence was dominating from. For the most part, all play at the net was dominated by Providence and when ACC was able to mount a formidable attack off of free balls or soft serves, they put up a strong block. The Pilots and Wesmen’s rematch of 2015’s starts tomorrow at 1:00 pm at Providence University College.