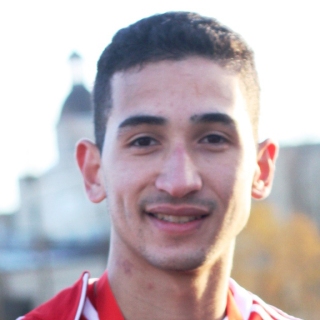 Fans of MCAC futsal competition may recognize Yahia Chihab’s name from the fall soccer season, when he was an integral part in the Universite de Saint-Boniface squad that won the 2015 MCAC Championship.

However in Week 14, Chihab earns MCAC Athlete of the Week honours with his exceptional play through two games at the Copa de la Paz futsal tournament in Brandon.

“I wanted to challenge Yahia and allow him to grow by putting him in situations that are out of his comfort zone”, says Les Rouges’ futsal head coach, Justin Legere.“He played as defender for me this weekend (a first in Chihab’s time spent with Les Rouges) and with his ball skills and distribution skills he did much more than score goals for us. He helped us keep possession of the ball and set up many scoring opportunities and he also proved to be a great ball winner”.

Chihab lit his coach’s expectation for a strong start to the season on fire, scoring 6 goals in Saint-Boniface’s win over Assiniboine Community College and another in Les Rouges win over Brandon University.Chihab and Les Rouges take on Red River College and Canadian Mennonite University at home this weekend, in the second leg of the MCAC Futsal season.