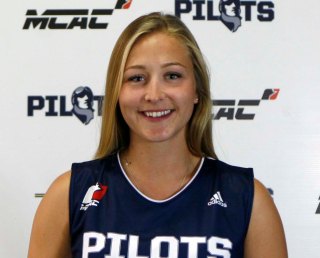 Amber Harms of the Providence University College women’s basketball team put on a double feature in Week 9. In the Pilots’ 50-44 win over the University of Winnipeg, the 5’9″ forward out-rebounded her point total by grabbing 12 boards and posting 11 points. Three days later against Canadian Mennonite University, Harms put up another double-double of 10 points and 12 boards in a losing cause as the Pilots fell to the Blazers 69-38.

PUC head coach, Joel Coursey, knows what to expect from his forward after last season.

“Amber is a very valuable second year player for us. Amber is hardworking with a strong understanding of the game. I think she is going to have a great season for us.” No other Pilot has logged more minutes or scored as many points as Harms so far this season, who is averaging 8 points and more more than 10 rebounds per game.

The Pilot’s record now sits at .500 with a 4 – 4 record, sharing second place in the MCAC with Red River College. They’ll take on the Rebels next as they’re hosted by them on January 29th.