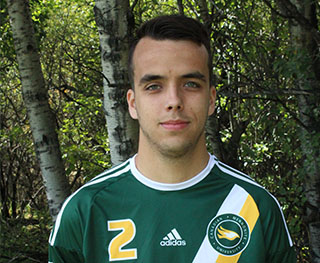 Michael Breton knows how to make an exit.

In his fifth and final regular season game in the MCAC, Breton buried his first career goal for the Canadian Mennonite University Blazers and help set up two others in a 13-1 win over Assiniboine Community College.

“His attitude and character have contributed to the overall way our team thinks about soccer and plays the field so for Michael to have a big offensive impact in his final game; that was a big plus for our group”, says CMU Head Coach, Russell Willms.

The win was one of seven this season for the Blazers who enter this weekend’s Men’s and Women’s Championships as the #1 seed in the conference. Though a fairly lopsided win against a Cougars squad who struggled to find their groove this season, the three points the Blazers came away with separated them from the pack in an otherwise tight Men’s regular season standings. Les Rouges of Universite de Saint-Boniface finished just one game back from CMU and feature a number of scoring threats that a player like Breton would be asked to shut down, but because CMU was able to secure top spot they will instead face the #4 Brandon University Bobcats in their semifinal game at 2:00pm on Saturday, October 24th at Providence University College.

In their two meetings this season, the Blazers shut the Bobcats out twice by a score of 4-0. If that is not enough evidence for Breton and Co.’s suffocating defence, the fact they posted 4 shutouts and a 1.0 goals-against average over 10 games, should be.

“Michael is a real leader on our team and he has been a steady, consistent defender for us for five years”, adds Willms.

An interesting match up in tomorrow’s game could potentially be Breton’s containment of Osian Edwards, Brandon University’s leading scorer who netted 8 goals this season, good for 4th in the conference.

CMU takes on BU at 2:00pm alongside the other Men’s semifinal game between Universite de Saint-Boniface and Championships host, Providence University College.

Check http://www.MCACathletics.ca or find them on Facebook for more info.