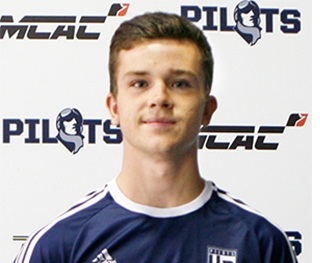 Currently, nobody has scored more goals in the 2015 MCAC soccer season than Mitchell Martens.

After 5 games played, Martens has buried 9 goals and helped lead the Providence University College Pilots to a 3-2 record good for 3rd place in the MCAC.

“Mitchell will do whatever is needed to help our team be successful. He played defense and midfield in our first few games but now he is playing forward. He his back to what he does best, which is score spectacular goals” says PUC head coach, Martin Ward.

Martens has scored in every game this season, including a hat-trick in PUC’s 4-1 win against Canadian Mennonite University on September 22nd.

The 5’8″ all-rounder is in his 3rd year with the Pilots and has been named a National Christian College Athletic Association All American in his previous two seasons.