If this weekend’s Volleyball Final Fours have taught us anything, it is to never judge a volleyball game by its first set. Despite two lop-sided opening frames at Assiniboine Community College on Sunday, the crowd was treated to two excellent volleyball matches to put a cap on the 2014-2015 volleyball season.

For the women, the University of Winnipeg College Wesmen are now the two-time defending champions after defeating Providence in four sets for their second MCAC title in a row. On the men’s side, the Red River Rebels found redemption from last year’s fifth-set loss in the finals to finish off what was a perfect season in the MCAC.

After a dominant 25-16 first set victory, things weren’t looking good for the Providence Pilots. The Rebels were pounding the ball, and stopping any runs the Pilots tried to get themselves on.

After showing life late in the second, the Pilots pushed to 22 points, but were still unable to ground the undefeated Rebels team. Despite not being able to win the set, Providence used that momentum to put it all out there with their season on the line in the third. The Rebels showed signs of strength, but through excellent setting and a strong attack up the middle, the Pilots were able to steal the third set 25-23.

The fourth was where the fireworks started. Providence, still reeling off a strong third set, came out flying, punishing the Rebels with strong net-play and good defense. But as the set wore on, the game evened out, and the setter-hitter combination of Erik Redekopp and Final Fours MVP Ty Loewen was almost unstoppable. After going blow-for-blow for the entire second half of the set, each team had an opportunity to win with multiple set-points. But at 29-28, the Rebels had Providence on the ropes, and officially capped off their undefeated season, capturing their 30th point of the set.

Ever since they faced off in the 2014 Women’s Final, the Providence Pilots and College Wesmen have been perhaps the most competitive matchup in the entire MCAC – and today’s final supported that entirely. 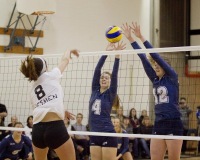 The parity that exists between these two teams was certainly apparent, but it wasn’t your typical back-and-fourth matchup. Providence came out firing in the first, dominating at the net with an attack led by Player of the Game Lauren Toews. The Pilots really never allowed the College Wesmen to get anything going, and it resulted in a 25-12 victory.

The second set was where we saw the matchup we were expecting out of these two teams. After at 16-9 start for the
Pilots, the College Wesmen battled back with smart positional play, and some exceptional serving by Final Fours MVP Jocelyn Bartos to win set two 26-24.

Once the second set ended, the tables felt like they had officially turned, with the College Wesmen pouring on the pressure, and finding a real groove in their offense. After taking the third set 25-12, they continued to roll, pushing their way to a 15-7 lead in the fourth. The game seemed like it was on the verge of becoming out of reach for Providence. The Pilots, however, slowly started clicking until momentum was almost entirely on their side to bring the set to 19-18 in what looked like it would be the turning point of the match.

But the College Wesmen just wouldn’t be denied, throwing momentum out the window and willing their way onto the scoreboard until they were crowned champions with a 25-21 fourth set victory.

Congratulations to both of our MCAC Volleyball Champions, and to all of the teams who competed in the MCAC this season. It was an exciting season with an equally exciting finish, and the MCAC is grateful for all of those who have supported the conference this year.