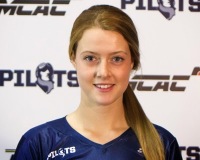 After winning the Women’s Volleyball MCAC Championship three out of the last four years, and holding the best record in the league once again this season, it’s clear there is a lot of talent coming out of Providence University College. Emily Van Der Meer is an example of that talent.

In her third year at Providence, Van Der Meer has proven to be a solid presence down the middle for a consistently solid Pilots team. In Week 17, Van Der Meer recorded 10 kills, five blocks, and three aces to defeat both the Rebels and Saint-Boniface in straight sets.

As her role on the team increases and the Pilots continue to roll this season, a constant presence like Van Der Meer’s is something that their coaches have been able to count on from the get-go.

“Emily has been a key part of our team all season,” says assistant coach Kyle Guenther.  “She has a very big block, can shut down our opponents big threats in the middle consistently, and she has been on fire offensively as well. You can see her growing more confident as the season progresses, and she has been connecting really well with our setter in the last few weeks. It has been a lot of fun working with Emily over the past three seasons, and even more exciting to watch the player she has become.”

After being handed their first defeat in the beginning of Week 18, the Pilots have five matches remaining as they strive to lock up the number-one seed going into the Final Fours at the end of the month. Many expect the Pilots to be the favourites going in, and if they’re going to succeed in taking home their fourth title in five years, they’re going to need help from Emily Van Der Meer to do it.