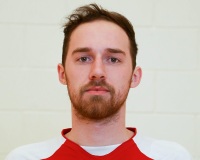 It was almost a year ago when the Red River Rebels lost their last volleyball game in the MCAC. After a crushing fifth-set defeat in last year’s Championship final, the Red River Rebels couldn’t have bounced back any better in the 2014-2015 season with an undefeated record of 12-0. Despite the talent being carried over from last year’s team, it is a first-year player who the Rebels have been relying on as of late – and that player is Erik Redekopp.
After cruising through Week 16 with a 3-0 record, the first-year setter finished with 18 kills and 64 total assists, along with a dominant defensive game against CMU which saw him pick up 20 digs in the five-set victory. He may be new to the team, but co-head coach Dylan Power sees Redekopp in a prominent role of leadership on the Rebels.
“Erik’s a leader on and off the court, and is certainly a major part in our team’s identity and personality,” says Power. Redekopp’s role in the Rebel’s offense has changed throughout the season, starting the year off a right-side hitter, and eventually transitioning into the role of setter, something Power has seen his rookie shape into nicely. “He has met this challenge head-on, and is playing great, allowing our team’s success to continue.”
Although the Rebels have cruised to their undefeated record so far, they will be in tough this weekend against a Pilots team who has yet to lose in 2015. It should be a great game to watch, and you can bet that if the Rebels are to keep up this pace, Erik Redekopp will be a big part of it.