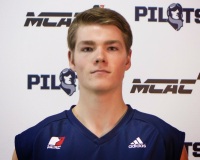 Whether “peaking at the right time” is anything more than a tired sports cliché remains to be seen, but after knocking down two straight-set matches to start the new year, the Providence Pilots Men’s Volleyball team may be doing just that.

After struggling out the gate, the Pilots not only find themselves above .500, but they’ve found themselves quite the player in freshman Matt Friesen.

With 20 kills in their 3-0 victory against CMU, Friesen had more than double the amount of kills of anyone else on the court, along with sharing a match-high in digs. His strength not only at the net, but on defense as well is something that is not lost on head coach Jason Peters.

“Matt has had a tremendous season for us,” says Peters. “He has been as impactful as any freshman has been for us in recent memory. He’s our top offensive option, and is as good in the back row as the front.”

That’s high praise from Peters, who after 12th years of coaching at Providence has seen his fair share of talent in front of him.

Friesen and the Pilots have taken their strong play into Week 16 as well, with another dominating victory. As they take the weekend off, the Pilots still have seven games left in the regular season, and after defeating a second-place Blazers squad in Week 15, the number two seed is well within striking distance. Regardless of where they end up, it’s safe to think that Matt Friesen will be a big part of whatever success they come by down the road.