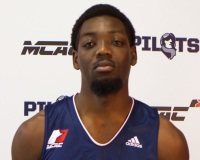 In the 2014-2015 MCAC men’s basketball season, it’s tough not to take the Providence Pilots seriously. With a pool of talent stronger than any team they’ve put on the floor in recent memory, there’s a lot to be excited about on this team. However, after their impressive comeback win against CMU in Week 12, it was hard not to talk about Rigueson Desorvil.

At the half, the Pilots were down 17, and Providence had quite the mountain to climb to get back into the game. That’s when Desorvil took over. With some clutch threes, key steals, and some incredible dunks to keep the momentum on the Pilots side, Providence ended up winning the game 90-78. Take a glance at the box score and you’ll see Desorvil all over it, with 35 points to go along with five rebounds, four assists, two steals and a block.

Believe it or not, those are the types of stat lines the Pilots have come to expect from the first-year Desorvil. Not only is he leading the league in scoring, but nobody is even within seven points per game of his 22.3 average. He also leads the league in assists, and is top ten in blocks, steals, defensive rebounds, and field goal percentage.

“Rig has been a great addition to our program this year,” says head coach Colten Gryba. “He has a natural scoring touch and has a great ability to read the defense to score points. Even though he leads us in scoring, he’s a very unselfish player and is always looking to get other guys going.”

Desorvil’s all-round game is a treat to watch, and the fact that he’s leading the league in scoring and assists speaks volumes to his team-first mentality on the court.

After dropping a game this week to the College Wesmen, the Pilots will be at home on Saturday trying to defeat the only team they haven’t beaten yet this year in the Red River Rebels. A victory may be a tall order, but with a player like Rigueson Desorvil, you’d be hard-pressed to find a game that’s out of reach.