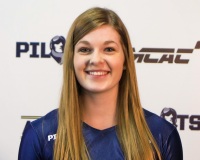 In a league where team’s stocks tend to rise and fall year-to-year, the last five seasons have shown you can always count on a strong women’s volleyball team out of Providence University College. Starting the season with a perfect 6-0 record, this year is clearly no exception, and it’s through recruiting players like LaRae Penner where you can see how this reoccurring success is a possibility.

Penner, a first-year right side out of Steinbach, was dominant in Providence’s straight-set victory against CMU in Week 12. She was all over the stat sheet with 16 kills, 5 digs, 7 blocks, and 3 aces in just three sets to go along with a 75% kill efficiency.

As Penner continues to show off her well-rounded ability on the court, the Pilots have been looking to the freshmen for production more and more as the season goes on. So far, head coach Scott Masterson likes what he sees.

“LaRae’s play as of late has been of the highest quality,” says Masterson. “She’s an incredibly effective attacker and has a natural understanding of what it takes to score in a multitude of situations. She reads the game very well defensively and has great ball control, which makes everyone around her better as well.”

After a tough defeat in last year’s MCAC finals, the Pilots look more focused than ever in becoming the champs once again. With a solid mix of new faces and seasoned veterans, the Pilots certainly have given themselves an opportunity to do so. And if Penner’s play as of late is any indication of the team’s potential, the Pilots have a lot to look forward to.