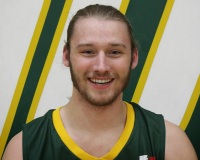 It was last February when Canadian Mennonite University knocked off the top-seeded College Wesmen to earn a spot into the MCAC Men’s Basketball Finals. Although they were unable to act out that result in their first meeting earlier this season, third-year forward Adam Bergen and his Blazers did a little bit of reminiscing in Week 11, defeating the U of W by three for their first win of the young MCAC season.

Bergen was dominant in the game, finishing with a monster line of 18 points, 14 rebounds, five blocks, four assists, and two steals. Making the win – and Bergen’s game – even more impressive, was that CMU was down 11 points with less than three minutes left, but fought their way back for the victory.

Although it took a lot more than Bergen’s presence on the box score to secure the comeback win, something head coach Billy Isaac is quick to mention when talking about Bergen’s role on the team.

“Adam is the leader of our team in every sense,” says Isaac. “Every practice or game you know that Adam will bring 100 percent, which automatically raises the level of play of his teammates.”

With that said, take one look at the season statistics and you’ll see Bergen’s name all over it. Bergen leads the league in defensive and total rebounds, while at the same time placing in the top ten in points, steals, and blocks.