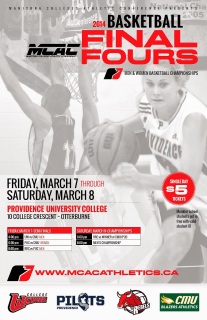 For years now, the Red River Rebels have held a stronghold in MCAC basketball. The women’s team has won two straight titles, and the men have dominated, winning the last five. But as great teams emerge, so does the bullseye on their backs, and this year in the MCAC, there are five teams itching to knock the champions off their thrones.

They’ll have their chance soon enough, as the MCAC Basketball Final 4’s are taking place this weekend at Providence University College, with the semi-finals being played on Friday, March 7, and the finals set for Saturday, March 8.

On the men’s side, we have the tightest competition in the tournament; with two teams separated by an end-of-season tiebreaker, and another two who have proven throughout the year they can hang with anyone in the league.

The first matchup sees the top-seeded College Wesmen taking on Canadian Mennonite University. The University of Winnipeg have swept the season series against the Blazers, and have looked like the most dominant team in the league. CMU however, came within two baskets of the College Wesmen earlier in the year, and will be looking to tap into that performance to pull off an upset in this one-and-done tournament.

In Friday night’s main event, the champs at Red River College take on a Providence team that just recently took them to overtime, and who will likely have a large crowd on hand to cheer them on. The home atmosphere will be a massive boost for the Pilots, however the Rebels simply know how to win, and will be quite the mountain to climb for the Pilots despite the late-season charge they’ve been on as of late.

On the women’s side, the classic rivalry between Providence and CMU will be reignited for a chance to play Red River in the finals. CMU has owned the matchup this season, that is, up until the final week of the season where Providence finally put everything together to defeat them in double digits. On paper, this should be quite the matchup, and with the raucous crowd that is likely to be on hand, it will be an entertaining game to watch no matter which way you look at it.

Below is the schedule for the Basketball Final 4’s. Single-day passes are $5.00 and can be purchased upon entry, and member school students with valid student ID get in for free.

Before each Friday match, the MCAC will hand out its All-Conference Team selections and regular season MVP awards to those athletes participating.