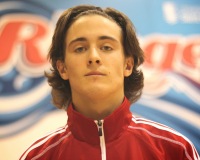 We’ve been seeing a lot of great upsets so far in the MCAC season, and in Week 18 we saw perhaps the most impressive one yet. On paper, the Université de Saint-Boniface men’s volleyball team wasn’t supposed to beat the first-place College Wesmen. But thanks to their endurance and a tremendous effort from the setter-libero hybrid that is Alex Sabourin, they did just that.

Leading the team in digs and aces, Sabourin had a dominant all-round game against the College Wesmen, keeping the play alive, and allowing the Saint Boniface offense to thrive throughout the match. Sabourin’s versatility is what’s perhaps the most impressive part of his game, as he has split time this season playing setter and libero, and simply shows up to play wherever he is called upon.

“Alex is a natural athlete and leader, and he has the ability to change the complexion of a match with one play,” says Saint Boniface head coach Guy Bourgeois. “He’s a tremendous defensive player, while rarely making a bad decision on second contacts. He helped our group a great deal in our win on the weekend.”

Sabourin, and the rest of Saint Boniface have quite a mountain to climb as they find themselves eight points out of a playoff spot, but couldn’t be peaking at a better time. Their next big test will come on Saturday when they look to pull off another great upset against the second place Red River Rebels.

Sabourin is in his first year studying sciences at Université de Saint-Boniface.