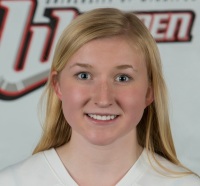 The College Wesmen’s first half of the season may have ended in a more thrilling fashion than they would have liked, but on paper, they couldn’t have asked for anything better. Finishing with a 3-0 record in the final two weeks of 2013, the College Wesmen continue to make a case to be the favourites to dethrone the defending champion Providence Pilots come February.

However, things could have ended a lot differently in 2013 if their 5-set thriller against Universitè de Saint-Boniface went a couple of points in the other direction. Thankfully for the College Wesmen, they had Chloe Pommer on their team, who finished the fifth set with six straight kills, resulting in a College Wesmen victory, and MCAC
Athlete of the Week honours.

The 5’9” power hitter dominated in all three of the University of Winnipeg’s wins to close out the year, and her strong play has been a huge influence on her College Wesmen team, who look very difficult to beat going into the season’s second half.

“Chloe was extremely responsible for our wins on the weekend,” says College Wesmen head coach Lee J. Montgomery. “Chloe isn’t known for being a vocal leader, but she leads by example with her positive attitude in practice, and exceptional in-game performance.”

Judging by the way the College Wesmen are turning it on as of late, it seems that Pommer’s attitude and work ethic is rubbing off on her teammates. Her team now looks to continue their strong play into 2014, and ultimately make a run at the MCAC Championship.

Because there was only one conference game in Week 15, the two weeks have been combined to provide a larger selection pool.