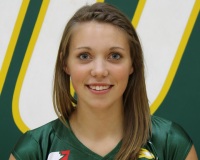 In sports, strategy and coaching is important, but it can only go so far in a team’s development. At the end of the day, it comes down to the amount of work the players are willing to put in to improve, and in the case of CMU’s Heidi Epp, she’s definitely put in the work.

Canadian Mennonite University swept the weekend series against Assiniboine Community College, and Epp was a huge part of it, accumulating 19 kills and 8 serving aces on the weekend. What is even more telling about those stats, is that this seasons he has been asked by her coach to make the switch from setter to left side for her fourth year on the team.

“Heidi’s leadership this season has been invaluable with her professional approach to her training,” says head coach Joe Moore, regarding the transition and hard work this season. “Heidi’s serve consistently puts our opposition out of system, and her passing efficiency has continued to grow as she becomes more established in her role as an outside hitter.”

It’s never easy to change positions four seasons into your varsity career, however, Epp is taking it in stride and using it as motivation to become an even better player. The Blazers have got to be excited about her development, and will be looking for that effort to continue throughout the year, as they try to stay near the top of the standings in the coming months of the MCAC season.

Epp is in her fourth year of studying general arts at Canadian Mennonite University.