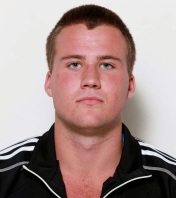 Every defending champion team goes into the next season with a target on their backs, regardless of what happens in the off-season. The Red River Rebels men’s volleyball team is no different – except that this off-season they picked up Kevin Bommersbach.

The 6’1” left side is a dominant force at the net, which was quite clear last weekend, as he finished the two game series against Assiniboine Community College with 30 kills in only five sets of play.

“Kevin is a wrecking ball of determination and effort on the court,” says co-head coach Erik Hansen. “He will run through anything to get the ball, and that effort is contagious for the rest of the team.”

It’s hard to argue his impact on the team, as once again Red River sits on top of the MCAC standings with a record of 4-1. And after holding ACC to less than 15 points in four of five sets last weekend, the team seems to be clicking on all cylinders.

Red River will take this long weekend to rest up, as they aren’t scheduled for any matches. They will, however, need another strong effort from a star player like Bommersbach on November 15, as they try to avenge their only loss on the year by taking on the College Wesmen.

Bommersbach is from Winnipeg, and is in his first year in the plumbing program at Red River College.