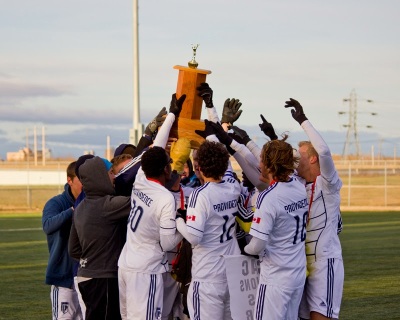 They may be under a new team name, but for the second year in a row the plaque on the Men and Women’s MCAC Soccer Championship trophies will read: Providence University College.

The men and women’s Providence Pilots were as on point as they have been all season during Sunday’s Championships, shutting out their opponents in both games, with both teams winning 2-0. The wins capped off an incredible season for both teams, with the Women finishing the year undefeated after their win against Red River, and the Men avenging the only blemish on their record by defeating Université de Saint-Boniface.

The day started off with the women’s game between Providence and Red River. It was a Week 8 rematch, which saw an identical result with Red River playing a tight defensive game, but ultimately losing the match 2-0. The action started early on in the first half in this one, with Providence pushing the pace with precision passing. For the most part, Red River looked up to the challenge, however after a few defensive stops, and a shot off the goalpost, Kate Osadchuk finished off a textbook corner-kick from Jessica Gzebb to put Providence on the board.

Providence didn’t see many chances again after that until they were given a corner-kick opportunity once again with about 20 minutes left in the match. And once again it was Osadchuk who sealed the deal with a beautiful header to the back of the net. The goal was good enough for a two-goal lead, and was also a deciding factor in Osadchuk being named Player of the Game.

Red River fought very hard in this one, playing great defensively, and breaking up countless chances where it looked like Providence would capitalize. However, this game simply came down to finishing, and unfortunately for the Rebels they just couldn’t get on the board in this one.

In men’s action, the game played out in a very similar fashion. Providence was able to get their offense going early on, as Player of the Game, Adrian Neufeld, made a beautiful deke around the keeper to tuck the ball into the open net. With the Pilots on the board, Saint-Boniface was forced to play catch-up ball, something that they just weren’t able to recover from, that might have forced them off their game plan.

The true tipping point of the match, however, happened with a few seconds left in the first-half. After a Providence free kick was turned aside by the keeper, forward Mitchell Martens flew in for the rebound, putting it top shelf just before the whistle blew for halftime. Providence never looked back, and Saint-Boniface never recovered, leading to the 2-0 Providence Victory.

There were a lot of outstanding players involved in these championships, but a couple stood out amongst the rest. The MVP’s for the tournament went to Providence’s Jessica Gzebb for the women’s, who had two goals in the semi-finals and incredible ball movement in the finals, and Mitchell Martens for the men, who scored three out of Providence’s four goals in the tournament.