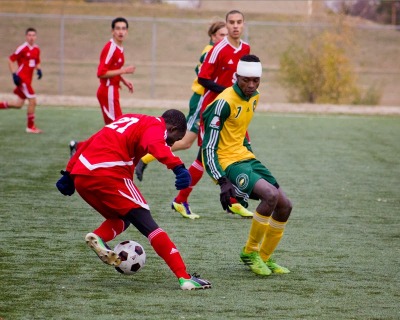 The Providence Pilots are still feeling the sting of their undefeated season being taken from them by Université de Saint-Boniface, and it really felt like both teams were itching to get back at each other one more time this season. Fortunately for them and for the fans, they will get their chance, as the men’s soccer MCAC Championship game will be played between Providence University College, and Université de Saint-Boniface.
The first men’s matchup of the day featured a Week 8 rematch, but with very few similarities. Last week, Providence won 7-0, but as the stakes were raised, Red River appeared a lot more up to the challenge.
Just like their women’s team, Providence started off electric, with two goals from Player of the Game Mitchell Martens early in the first half. The Rebels, however, came out in the second half a different team, and the packed crowed witnessed quite the back-and-forth matchup.
After being kept in the game on many occasions by goalkeeper Amarjeet Johal, Red River pressed forward offensively, and a penalty kick scored by Lloyd Hildebrand with ten minutes left made it a one-goal game. However it was too little, too late at that point of the game, and Providence was able to hold on to earn an opportunity for an MCAC Championship repeat.
The final match of the afternoon was perhaps the most exciting game all day. The first half of the match was dead even, with both teams trading strikes, and both goalkeepers on CMU and Saint-Boniface coming up up with massive saves to keep it 0-0.
As the clock ticked down in the second half, it looked like this game was destined for extra minutes – but it became clear very quickly that Saint-Boniface wanted to end this in regulation. With less than ten minutes left to play, Les Rouges went on the defensive, and after a beautiful tic-tac-toe passing play, Elmahdi Khattabi made no mistake, finishing the beautiful play in the back of the net.
After Saint-Boniface’s Nabil Ibnou Zahir scored yet another highlight-reel goal with two minutes left, CMU tried desperately to fight back. However, almost immediately after a goal by Simon Dueck, the whistle blew, and time expired meaning that the grudge match was officially between Providence and Saint-Boniface.