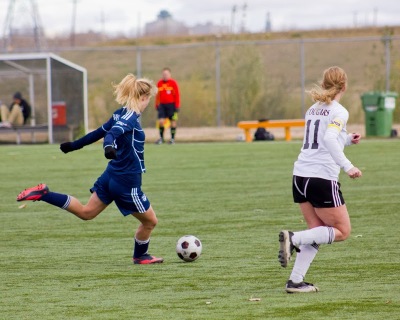 After an undefeated season, it wasn’t a secret that the Providence Pilots women’s soccer team were the favourites going into the Final 4’s. What we didn’t know was just how motivated they are to take the trophy home. However after their 10-0 victory against Assiniboine Community College in the first game of the day, they certainly turned some heads.

The game was really all Providence starting from the very get-go. Just over a minute into the game, Jessica Gzebb, scored a quick goal and they really never looked back.

Providence looked primed and ready for the finals, completely controlling the pace of the game and showing why they are the defending champions.

MCAC Regular Season MVP Julika Kehler continued her dominant play into the playoffs, notching two first half scores, and another in the second, leading to her being awarded Player of the Game honours.

This was ACC’s first playoff game in the MCAC, and it was certainly an experience they will build upon for next year. As for Providence, they will look to complete their championship aspirations on Sunday afternoon against Red River, the winners of the second women’s matchup of the day.

The CMU vs Red River match was destined to be close, as these two teams were tied in the season series, and even finished the regular season with identical records. In a defensive matchup like this, it was fitting that the only goal scored in the game was the result of a free kick.

The lone goal in the Red River victory was scored by Player of the Game, Jena Wilks, who perfectly placed a shot over the heads of her opponents, and into the top corner of the goal. Celebrating with a fist-pump, the tides officially shifted over to Red River, who held CMU off for the rest of the second-half to give their team the victory.