The 2013 season ended last week with both Providence teams looking in top form as they try to defend their titles at this year’s MCAC Soccer Championships. But with the rest of the league sharpening their chemistry in the final weeks of the season, it’s shaping up to be an exciting weekend ahead in the MCAC. 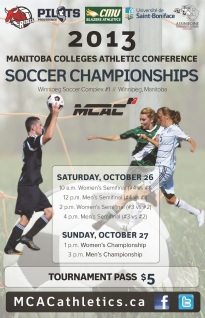 The MCAC Final 4’s will be taking place this weekend at the Winnipeg Soccer Complex #1, with the semi-finals being played on Saturday October 26, and the finals set for Sunday October 27.

On the women’s side, Providence has been the runaway top team, finishing with an undefeated record, and a pair of shutout wins last weekend. They’ll be facing off against Assiniboine Community College, who’s celebrating their first season in the league, and will be looking to make a name for themselves in their first Final 4 match. The 2-3 matchup is an intriguing one, as the #2-seeded Red River College goes up against #3 Canadian Mennonite University. The two teams were tied in points at the end of the season, making this game one to keep an eye on this weekend.

For the men, Université de Saint-Boniface may be the team to watch, as they were the only team this season to defeat the top-seeded Pilots. Neither team will want to get caught looking ahead to a potential USB vs. Providence final, as Red River and CMU have both played their semi-final opponents tough this season. In fact, back in Week 3, CMU dominated USB on their own pitch with a 7-2 victory.

However, whatever happened in the regular season can prove to mean nothing at all in this win-or-go-home style tournament, so make sure you’re there this weekend to see it all unfold.

Below is the schedule for the Soccer Final 4’s.

Before each Saturday match, the MCAC will hand out its All-Conference Team selection and regular season MVP awards to those athletes participating.

Tournament passes for the entire weekend will be sold for $5.00 at the Winnipeg Soccer Complex during the tournament. There will also be a canteen open throughout the day for refreshments.