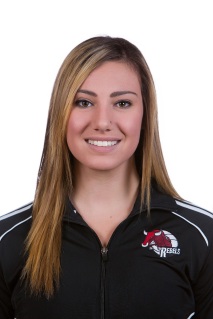 Those in the Rebels women’s volleyball camp will tell you that anything less than a championship this year is a disappointment.
Despite sitting with a #3-seed right now, with inspiration from players like Natalie Manicotto, that goal won’t seem like too much of a stretch in the second half of the season.
In Week 11, left side Manicotto not only put up incredible individual stats in two games against Université de Saint-Boniface (Nov. 17) and CMU (Nov. 20), she overcame personal tragedy as well.
Manicotto lost her grandfather the morning before the Nov. 17 match. Not only did she courageously play though, she put up 16 kills and eight digs in just four sets.
“It was an inspirational game,” said Rebels head coach Lea Romanchuk, who called it one of Manicotto’s best as a Rebel.
“Natalie is a leader on and off the court and does so through not only with her voice, but also her actions.”
The story didn’t stop there, though. In just three sets against CMU on Nov. 20, she put up 14 kills, two blocks, and an astounding 20 digs to lead her team to another victory. The Rebels now sit at 5-3, with a huge back-to-back against first-place Providence University College coming up before the holiday break on Nov. 30 and Dec. 1.
The 5’8” Manicotto, who is in her second year with the Rebels, is a graduate of Shaftesbury Collegiate, and is working towards a diploma in business administration.