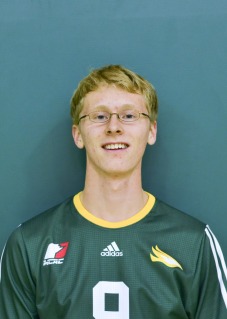 If returning athletes is the key to college sports success, than an experienced men’s volleyball team from Canadian Mennonite University looks ready to hit their stride in 2012-13.
One of those experienced athletes is left side Shawn Franz, who was the outstanding performer in CMU’s Nov. 1 win over Université de Saint-Boniface. Though his team took it in three straight sets, Franz still had enough time to stuff the stat sheet – recording 11 kills, nine digs, two blocks, and four service aces.
Now in his third year with the Blazers, Franz is part of a core that will look to improve on a 4-12 finish and semifinals oust last season. This year, they’re already 2-2 and only a short cry from the College Wesmen who lead the conference.
The 20-year-old Franz stands 6’3” and is part of a notable group of outside power hitters for CMU. Studying psychology, he is a graduate of Mennonite Collegiate Institute. Franz hails from Gretna, Manitoba.