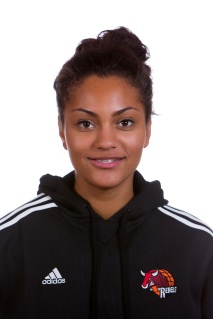 Starting a title defense season with a 23-point loss can take the air out of any team.

Not so, though, for the women’s basketball team from Red River College. They turned right around after losing their home opener 65-42 to University of Winnipeg College and won two days later on the road, 63-53.
The Rebels frontcourt, a consistent reason for their success last season, has been bolstered even further with the addition of first-year Andrea Duncan. Her 12 points in the Oct. 27 win was welcome help, as three forwards combined for 37 of the team’s 63 points.
“She’s one of our rookies who’s made a huge impact in our rotation,” said Rebels head coach Jaenas Pangilinan.
Along with returning forces in Tia Ruddock and Trey Francis, the 5’8”, 18-year-old Duncan will prove to be a matchup problem for teams as the year goes on. The now 1-1 Rebels are looking to win their second straight title after capturing the final in 2011, despite finishing behind the College Wesmen in the regular season.
They continue their season on Nov. 16, when they’ll host a rematch of last year’s Women’s Championship against Providence University College.
Duncan is a graduate of St. James Collegiate.