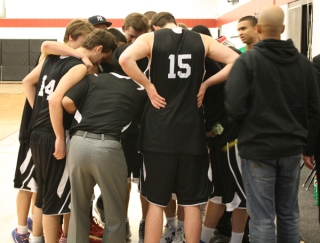 Call it March Madness, or whatever you want. The month just seems to bring a new face to Red River College, who raised their game in the playoffs for the fourth straight year to head to the Men’s Championship.

In the men’s semifinal upset of the day, #3-ranked Red River College beat #2-ranked University of Winnipeg College 84-70, after a hard-nosed second half that showed their overpowering inside strength.

Forward Corey Neufeld was all over the floor for the Rebels, who also got late clutch shots from guard Jason Malcolm and Player of the Game Matt Loewen.

In the other semifinals game, the CMU Blazers, #1 seed and winners of eleven straight, tore apart the #4 Providence Freemen for an 82-56 win.

It sets up what should be a torridly-paced final between CMU and Red River College, both teams the most recent champions of the conference. Red River has taken home the title in 2009, 2010, and 2011. CMU will be looking for their first title since 2008.

The #1 CMU Blazers will take on #3 Red River College in the Men’s Championship Saturday at 8 p.m.

The #2 College Wesmen will take on #4 Providence in the men’s bronze match Saturday at 4 p.m.