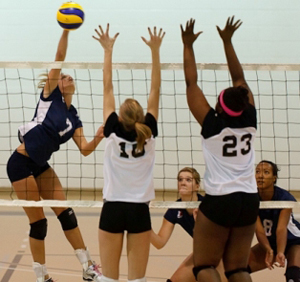 When trying to hand an undefeated team a crushing blow, even a loss can be a rallying cry.

For Lauren Toews and the Providence University College Lady Freemen women’s volleyball team, a five-set loss to undefeated Canadian Mennonite University on February 3rd might preview how tight the Manitoba Colleges Athletic Conference (MCAC) Volleyball Final 4’s could be – despite differing talent levels between the teams.

Toews, a freshman added to the Lady Freemen roster this year, was outstanding on the right side, providing her team with 12 kills, six aces, seven digs, and three blocks in the match.

“Lauren has been a great addition to our team this year and has been great for us offensively throughout the season,” said Providence head coach and athletic director Scott Masterson. “She gets us out of a lot of trouble and helps us keep a balanced attack.”

“This last match was no exception to that but she also played her most well rounded match of the year.”

The match had one extended set and was the first time this season that CMU has been pushed to a deciding fifth set.

Toews, a 5’10” graduate of Miles Macdonell Collegiate, is studying business.