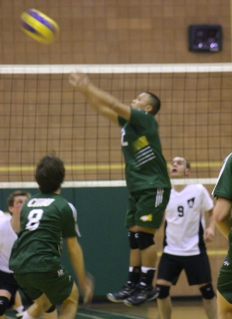 In the past two seasons, established hitters on the left and right side have propelled the Canadian Mennonite University Blazers men’s volleyball team to finish near the top of the conference.

This year has been a different story.
While the team, who sits today at 4-10 and fourth in the conference, has been in transition most of the season – their new setter Selanne Sangalang proved in Week 14 that he’s ready for the spotlight.
Setting up established kill leaders Todd Reimer and Shawn Franz effectively for 12 kills each, Sangalang spread the ball around and helped the Blazers make quick work of the third-ranked University of Saint-Boniface, upsetting the Voyageurs in three dominating sets.
It was a revenge win as well for CMU, who had lost in four sets just the night before. It was their first win of the season over a team higher than them in the standings.

With improving play from their setter, the Blazers make the case for a four-team race coming down the wire in the 2011-12 volleyball season. With strong competition between the College Wesmen, Red River Rebels, and Saint-Boniface – CMU will look to their new players to help make a possible splash come the Volleyball Final 4’s on February 23 and 24.