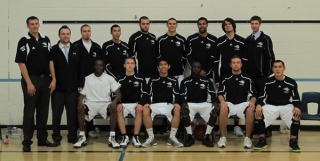 After being unable to meet the required number of players for Manitoba Colleges Athletic Conference (MCAC) basketball competition, the men’s team from Assiniboine Community College (ACC) has withdrawn from the rest of the 2011-12 season.

“It is regrettable that this decision had to come at this point in the season,” said ACC athletic director and MCAC president Larry Shannon. “We look forward to getting our men’s basketball team back into competition in 2012-13.”

At the time of withdrawal, the ACC Cougars were 4-4 and third in the conference standings. While all future games involving the Cougars will be wiped from the MCAC schedule, games completed will continue to count towards the remaining four teams’ records. All four teams played ACC once at home and once on the road before January 24.