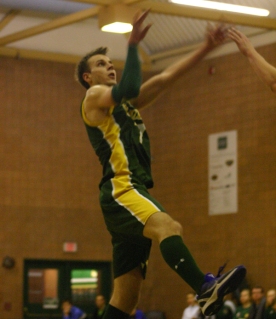 For Wyatt Anders and the ever-improving CMU men’s basketball team, the numbers speak for themselves.

In a Friday win over the three-time champion Red River Rebels, Anders shot an outstanding 75 per cent from the field on his way to a near triple-double with 11 points, 15 rebounds, seven assists.

His Saturday game, though, may go down as one of the dominant MCAC performances all season.

Scoring 30 points, grabbing 17 rebounds, and adding a block and five steals, Anders not only dominated offensively in a 76-59 win, he also held Rebels forward Mike Hebert (who scored 30 the night before) to just nine points. “His performance was dominant,” said CMU head coach Darcy Cross, “Anytime someone gets 20 rebounds in one game, you know they played well. Add his 30 points? Enough said.”

“He has put in the work and now it’s showing in his play. I’m proud of him.”

With the two important wins, CMU is now neck-and-neck with the University of Winnipeg College Wesmen at the top of the conference.

Anders, a 6’7” centre in his second year with the Blazers, is studying Education and calls Winnipeg his hometown.