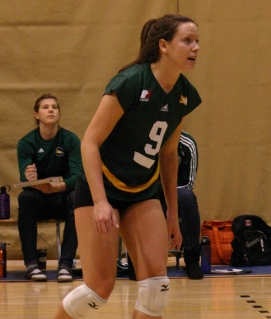 Perfection is difficult to achieve. For the Canadian Mennonite University (CMU) women’s volleyball team, though, achieving perfection is easier when you have a left side as talented as Evelyn Kampen. Kampen had an impressive Week 10, highlighted by two matches against the University of Winnipeg College Wesmen – a matchup voted by the conference fans to be the Matchup of the Month.

In her Saturday outing, she had 17 kills, 12 digs, and five blocks. On Sunday, she improved – recording 20 kills, seven digs, and two blocks. CMU won both the matches in straight sets, ending the week a perfect 7-0.

These remarkable stats are nothing new for Kampen, a two-time Manitoba Colleges Athletic Conference women’s volleyball MVP and a player who spent two years playing in the Canadian Interuniversity Sport (CIS) with Trinity Western.

Kampen attended high school at River East Collegiate and is working towards a degree in communications.

For video highlights of Kampen and the rest of CMU’s win over the University of Winnipeg,