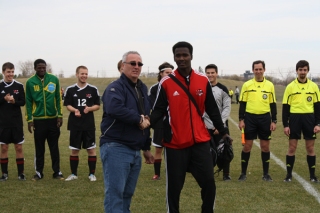 On a beautiful autumn day, eight teams in men’s and women’s soccer took to the fields at Red River College’s Notre Dame campus – all with the intent of being one of the four left when the evening arrived.
The University of Winnipeg Wesmen entered as #1 seeds and heavy favourites in both men’s and women’s soccer. They did not disappoint, as the women breezed by fourth-seeded Red River College in a 9-0 blowout.

The men had more difficulty, taking on a University of Saint-Boniface team that played them tough. In the end, three goals by Wesmen All-Conference selection and league leader in goals Kenny Sacramento would be most of the difference as the Wesmen won 5-1.

While the Wesmen played to expectations, a pair of teams exceeded them. The third-seeded Red River College men’s team, in their first year of soccer competition, managed to pull off a 3-0 upset over #2 Providence University College, a team with four All-Conference selections within their forwards alone. Anchoring the Rebels were fine performances from Paul Bigras and player of the game Ebens Jacques, who each had a goal in the first half.

The last team to win in the semifinals were the Providence women, who had a surprisingly easy 6-0 win over Canadian Mennonite University. Both teams had crowds show up in earnest for the early 10 a.m. start and it was All-Conference selection Annemarie Kaethler who showed her A-game, scoring three goals and pushing her team to a final round matchup with the vaunted Wesmen.

Tomorrow’s bronze medal matchups are below, and will both be played at 11 a.m. simultaneously:

For more information on the soccer championships and to see a complete list of All-Conference selections and MVP’s, click here.