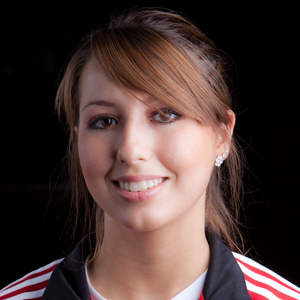 Even though her women’s soccer team went through the 2011 regular season without a win, it was only a matter of time before Domonique Colatruglio earned the spotlight for Red River College.

The 20-year-old striker, in her second year of study at Red River College, scored two goals in a 4-2 loss to Canadian Mennonite University. In fact, Colatruglio scored three of her team’s five season goals, as the Red River College women struggled in their opening campaign. In the eyes of head coach Doug Lawrie though, Colatruglio is one of the bright spots. “Domonique played a tremendous game against CMU,” said Lawrie. “She managed the ball well in the midfield and continually threatened the CMU goal area with penetrating runs and outstanding service.  Her previous experience as a provincial team member is evident as she increasingly puts her mark on our games.”

In addition to her time spent with the Manitoba provincial team, Colatruglio has played with the Regional Training Centre, spent time as the team captain for Northern Lights, and coaches the Lindenwoods 5-year-old soccer team.