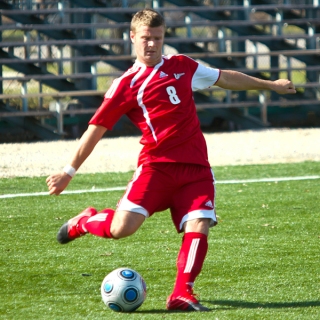 In a busy Week 4 for men’s soccer, one player stood out for making his biggest contribution of the season so far. Thanks to an outstanding four goals by their midfielder Adam Bromley, the University of Winnipeg Wesmen beat Red River College 6-1 to remain perfect in 2011. With the “hat trick plus one”, Bromley leapfrogged a few of his teammates to momentarily lead his team, the most prolific in the league, in scoring. The team captain of the Wesmen, Bromley grew up in Cornwall, England and is playing in his second year for the University of Winnipeg.

Bromley is working towards a degree in kinesiology and notes community work as one of his significant time commitments when he’s not on the pitch.