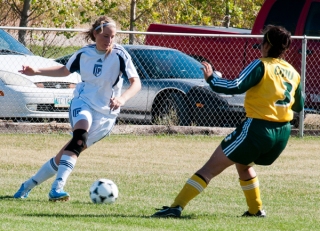 With an important game that also served as a possible preview of the first round of the MCAC Soccer Championships, Annemarie Kaethler came through in a big way – pushing her Providence University College Freemen women to a 3-0 shutout of Canadian Mennonite University. In the game on Sunday, September 25th, which was played in Otterburne, MB, the 18-year-old defensewoman Kaethler scored two of her team’s three goals, handing CMU their first loss of the season and pulling the Freemen into a tie for the runner-up position in the MCAC.

“Annemarie has made huge strides in the off-season and as she continues to get better defensively, she will be become a real threat for the remainder of our season,” said Dante Calla, Providence University College women’s soccer head coach. “She has the ability to beat her player to score and the ability to set her teammates up for easy goals, which makes her tough to control.”

Kaethler is in her second year of studying sociology, and attended high school at Steinbach Regional Secondary School.